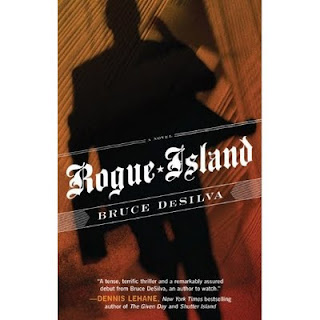 Questions I'm Never Asked but for which I have Ready Answers:
You quit a secure senior editing job at The Associated Press to try to make a living writing crime novels. Are you nuts?
Secure? Haven’t you heard about the waves of layoffs in the news business? I had a good run in journalism; stories I edited won virtually every major prize including the Polk and the Pulitzer. But in recent years, I grew disillusioned by the economic collapse of newspapers, the descent of TV news into dueling propaganda machines, the unreliability of the blogosphere, and an overall decline in journalistic standards. I decided to try something new because I felt like journalism had left me.
So how’s it working out for you?
Better than I had any right to expect. My novelist-friend Dennis Lehane said not to expect to make any money until the third book—if then. By that standard, I’m a little bit ahead of schedule. My first novel, Rogue Island, has received rave reviews been short-listed for the Barry Award and won the Edgar Award for Best First Novel. It’s in a second hardcover printing and will be released in trade paperback on June 21. Cliff Walk, The second book in the Mulligan crime series, will be released early next year, and I’m now writing the third. After 40 years in journalism, worrying every day about accuracy, I’m having a ball making stuff up.

What made you, a lifelong NONfiction writer, think that you could write a novel?

A few years ago, when I was still a journalist, I got a note from a reader praising a “nice little story” I’d written. “It could serve as the outline for a novel,” the note said. “Have you considered this?” The note was from Evan Hunter, who wrote mainstream novels under his own name and the great 87th Precinct police procedurals under the name Ed MBain. I taped the note to my home computer and started writing, but my busy work and family life left little time for writing fiction. It took me years to finish the book. Now that I’m writing fiction full time, I can complete a Mulligan novel in six months. That note from Hunter, by the way, is still taped to my computer.


What makes your series hero, Liam Mulligan, different from other detectives in the crowded crime-fiction genre?


Real private investigators aren’t much like fictional ones. The real ones spend most of their time delivering summonses, locating child-support delinquents, investigating pilfering from warehouses, checking the validity of insurance claims, and doing background checks on job applicants. They rarely investigate violent crimes. Most of the so-called “unofficial” fictional PIs are even more divorced from reality—so much so that they exceed my ability to suspend disbelief. I could never write, and will not read, books in which crimes are solved by hairdressers, dentists, or cats. My character, Mulligan, is an investigative reporter—one of the few occupations outside of law enforcement that really does investigate serious wrongdoing. Until recently, there haven’t been many crime novels about investigative reporters. (Gregory McDonald’s hilarious Fletch novels are among the few that come to mind.) But lately, we’ve seen a small flurry of them, mostly written by laid-off newspaper reporters. Still, Mulligan’s profession makes him somewhat unusual in the genre. Better yet, he’s a throwback—an old-time street reporter hell-bent on discovering the truth at any cost. He’s a dinosaur in the age of sound bites and biased reporting. Finally, he works not for a TV network or web site but for a newspaper that, like most American newspapers, is dying. This adds an additional layer of tension to the story, the character never sure how long he’ll have a job and always in despair about the demise of newspapers. It also makes the Mulligan novels lyrical tributes to the vanishing business Mulligan and I both love.


Is Mulligan based on someone you worked with in the news business?


Mulligan is me—except that he’s 24 years younger, six inches taller, and quicker with a quip. He’s an investigative reporter; I used to be. He doesn’t do well with authority; I do worse. He’s got a smart mouth; I get a lot of complaints about the same thing. He and I both have a fierce but shifting sense of justice that tempts us to cut corners and work with bad people to bring worse people down.


Why did you set your series in Providence, R.I., of all places?

The most memorable crime stories transport you to interesting places and let you hear, see, and smell them. It is difficult to imagine Ken Bruen’s best novels set anywhere but in his native Galway. Read James Lee Burke’s Dave Robicheaux novels and you have been to New Iberia, LA, even if you’ve never left your house. As my friend, the novelist Thomas H. Cook, once said, “If you want to understand the importance of place, imagine ‘Heart of Darkness’ without the river.” One of the places I know best is Providence, R.I., where I began my journalism career. It’s a fascinating place. Unlike big, anonymous cities like New York, where most fine crime novels are set, Providence is so small that it’s claustrophobic. Almost everybody you see on the street knows your name, and it’s almost impossible to keep a secret. Yet it’s big enough to be both surprisingly cosmopolitan and rife with urban problems. The city, and the state, have a legacy of corruption that goes all the way back to a colonial governor dining with Captain Kidd, but it also has a legacy of decency that goes back to its Godly founder, Roger Williams. Those two competing strands are woven throughout the state’s history, and they are still there today. This makes the city-state an ideal location for crime fiction. I made Providence not just the setting, but something akin to a main character, in Rogue Island. I never considered setting the series anywhere else.
I’ve heard novelists say that their characters come to life and take over the story, doing and saying all kinds of things the writer hadn’t intended. Did this happen to you?
I had a good laugh several years ago when I heard the great Elmore Leonard talk about this. Once, he said, he called his publisher in a panic because he was only half-way through a novel when his main character got shot dead. To the rational journalist in me, that seemed like mystical nonsense. Only one person touches the keys – the writer. The idea of characters developing wills of their own, I thought, was artsy-fartsy nonsense. Until it happened to me. In Rogue Island, the protagonist’s ex-wife, who started out as a minor irritant, turned into a vengeful bitch. A big, dangerous hit man shrank to five-foot five and developed a bad case of psoriasis. A fire chief who began as a minor character decided to become a major one. And then he decided he was a she.
There is a lot of humor in your hardboiled novels. What’s up with that?
Some crime novelists, such as James Ellroy, write great books that are unrelentingly grim. Others, such as Tim Dorsey, write slapstick-noir novels that keep you laughing from beginning to end. Most crime writers, including me, fall somewhere in between, tempering dark stories with flashes of humor. Some writers try to accomplish this with a wise-cracking protagonist, but a smart mouth is not enough. Humor shouldn’t be tacked on. It should serve the story. The late Robert B. Parker’s great private-detective hero, Spenser, for example, is given to making wisecracks; but his put-downs reveal character, showing us his attitudes toward pretentiousness, authority, and women. In Rogue Island, each line of humor in this dark story is there to reveal the character’s world view. But a writer must beware of anything that falls flat. The trouble with humor is that it has to be funny.
What’s it like being the second-best writer in your family?

Oh, God! It’s a daily humiliation. My wife, Patricia Smith, is one of our greatest living poets. Seems like every week someone gives her another award: The Pushcart Prize, the Rattle Poetry Prize, the National Poetry Series Award, the Hurston-Wright Legacy Award, the Paterson Poetry Prize . . . At least she was only a finalist for the National Book Award. If she’d won that, I might have had to kill her—or myself. (In case you are reading this, baby, that was a joke.) The fact that I am married to this amazing woman astonishes me daily. We’re a great team. I edit her poetry; she edits my fiction. Our writing styles are nothing alike, and that’s one of the things that make the partnership work. Her writing is rich to the point of being sensual. Mine is spare to the point of sensual deprivation. I help her make her work tighter and crisper. She helps me make mine more descriptive and lyrical.
How do you deal with writer’s block?
I spent four decades working as a journalist. Journalists aren’t allowed to have writer’s block. They are paid to write every day, whether they are in the mood or not. They think writer’s block is for sissies.
Posted by Nigel Bird at 13:20