The results of the Spinetingler awards were out yesterday.

I spent most of my time in an aircraft hangar showing old wartime footage from my area on a loop.  It was much more fun than I expected and the views of the old outdoor swimming pool from my town were quite something.  Why anyone would want to swim in the Scottish seas all year round, however, is a mystery to me.

I got to sneak out and view the scene for a while.  There were enactments of bayonet training, bunker-storming and 1940s weddings.  A biplane did somersaults in the sky and I bought an ice-cream from a man in an old van.  Quite cool.

Better still, I got to read two exceptional stories by Eric Beetner and Chris Holm which are going to be part of our Pulp Ink anthology.  It just gets hotter and hotter.  I also managed a couple of thousand words of my novel in spite of (or maybe inspired by) Churchill's words.

By the time I got home, my number at Spinetingler was already up.  It wasn't the number I wanted.  It was, however, great news for Matthew Funk and I'd like to congratulate him here for a piece of brilliance.

My blues have almost gone and I have a sense of pride at being nominated at all.  It's a testament to Spinetingler just how much I wanted it.  The work they do all year is amazing and the organisation and effort they put in is very much appreciated - thanks guys.

Congratulations to all those winners out there and to those who didn't get chosen, you did a brilliant job just getting there.

If you voted for me, I'm ever so grateful to you.  Thank you.

A quick reminder that there's another instalment of Pablo D'Stair's brilliance today.  This time he's going to be over at the wonderful Drowning Machine.

And today's another day. I hope it finds you well. 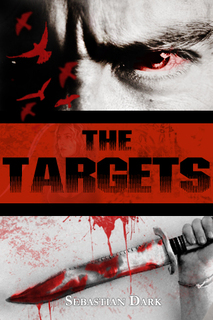 So you're an author? What's your background?


An author, that's right. Living the dream doing it, too. I wrote THE TARGETS, a Kindle Book selling for £2.25 at Amazon


Background? I'll do a quick one. I know readers are more interested in the book. Graduated from Harvard in 2002, and wrote over seven full length novels in my four years there. The sad thing? None of them were published.


Nope, and not for a lack of trying, either. It made me a better writer overall, I think.


What'd you do after, then?


Went to work in a criminology consulting firm. We were in Chicago, and I stayed there another five years. That's when I started writing thrillers, and my work inspired a lot of my writing.


Found a market for my books and got them published. Let me quit the job and live the dream. Been doing it for the six years since.


So then why haven't I ever heard of you?


Oh, I think you have... ;) Sebastian Dark is a pen name I picked up for my new series of Kindle-only thrillers.


I could tell you.. but then I'd have to kill you.


Damn right. Although, I don't know if my publisher would kill me first, for self-pubbing without them.


So this book, then, THE TARGETS? You published it yourself?


Joining the ranks of the ebook revolution, yeah. I did all of the work on it - cover, formatting, and (no shit) writing.


And what's it about?


It's a psychological thriller starring a grizzled New York detective who's looking forward to a quiet life in a small town. When he gets there, though, he finds that things aren't quite as they seem, and is forced into combat against a deadly, determined serial killer.


How'd you come up with the story?


It was a story I always wanted to tell, but my publisher didn't show interest in. The reason? The ending was too unexpected, too "shocking" for the readers.


But you could write it if you published yourself, right?


That's right. I can also do things like this interview (shout out to my man Nigel!). And I control the price of my own books. That's key for me. If I keep a lower price than other available books (THE TARGETS is £2.25), I can get my work out to a wider audience. More people will buy the book because it's at an accessible price, and more will enjoy my writing.


So how long did this one take to write?

The idea for this book has been lying around for a long time. I wrote tons of notes about it while being at the mercy of my real publisher, so I had those to go from. When I actually sat down and wrote it, though? Probably six or seven weeks.


Nice! Seems like you put in a good effort.


Definitely. I strove to make this book of equal (or better, even) quality than the e-books put out by the major publishing houses. At the same time, because I don't have to pay for overhead and staff, I can keep the price low enough to entice readers.


Well, I'll definitely be checking it out. Any last words?


Like I said, THE TARGETS is a planned series of books, all based around the main character, Detective Ryan Jackson. So if you read and like this one, keep an eye out for more in the future. And since I'm self publishing them, there's no delay between when I finish and when readers can get it.


Also, one last thing: I'll be sticking around in the comments section if any of the readers have anymore questions. After all, one man can only interview himself for so long..


and after posting that, i feel one hell of a lot better.  thanks Sebastian.