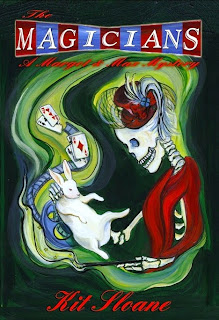 1. Why do you write mysteries, often a maligned genre form?

Frankly, I think mystery writers call criticism on themselves when they write “mystery” stories filled with talking animals, paranormal whatevers, vampires, and quilt makers, not to mention including recipes, for god’s sake. Well, I like my mysteries filled with strong characterization, good suspense through logical events, heavy on authentic atmosphere, and pretty witty dialogue because the characters have BRAINS, brains and senses of humor. That’s what I like to read and that’s what I try to write. My favorite compliment is when a reader says that it the story seemed so real!

2. Can you put a label on the type of mysteries you write?

I hate labels. Readers miss a lot if they follow labels exclusively. Labels are for PR and for libraries and for editors or agents pitching a book. My mysteries are traditional in that they follow certain British mystery styles from the Golden Age, e.g., using location as another character, emphasis on dialogue, and characterization. I thought they might fall under the “cozy” label but someone sent me a review from a “cozy” reviewer who said she hated the use of certain swear words and the fact that the protags aren’t wed, which I think is none of her business, anyway! “Off beat,” that’s the label I get the most. That covers the fact that I don’t always have murders or people tripping over dead bodies, BUT they’re still good suspenseful “mysteries” in the traditional sense that you don’t know what’s going to happen next. As I told some guy at a signing who questioned whether I actually wrote mysteries since the book he was reading was body-less, that, to me, life is mysterious. He walked out. Sob.

3. Why write mysteries with Hollywood types as your protagonists, or, as one rejection from St. Martin’s said, “Who really wants to read about Hollywood, anyway?”

Oh god, I love L.A. I know that is so politically incorrect, but my husband and I love (mostly old) movies and my daughter (who does my covers) is a real live art director there and her significant is a production designer. The people they know are energetic, competitive, ambitious, often eccentric, and generally fascinating to talk with. Mostly I just listen and then go write another story. Hollywood isn’t a place for small personalities and the “business” reminds me a lot of publishing. It takes so many people doing their creative thing to create a film (or a book) and it’s all based on upfront money. Hellish ways to make livings!


4. Why a film editor? As your female protag says, “no one cares about film editors.”

When my then agent suggested I start a new series, my best friend was “interning” (read working unpaid) at the Sal Zantz post-production studios in Berkeley. The editors I met through her were all women, rather shy and retiring types. What great personalities for a mystery, I thought—your basic wannabe wall flowers working in quiet isolation thrown into problematic situations and forced out of their comfort zones into the spotlight. Perfect. Then I teamed up my female film editor with an ex-lover, a popular, successful film director who, naturally, works with these wildly off-the-wall egocentric personalities and what’s Margot gonna do? Shut the door and sulk? She has to join them.

Margot is probably much nicer than I am, but we do tend to think alike. I’m shy, too, and prefer huddling over my computer to going to a party. And Max.... Well, I do adore Max. One of my sister-in-laws, however, hates Max and told me so. I’m afraid to ask why. But he’s funny and attractive, and talented and he loves Margot, so what’s to hate? Yes, he’s narcissistic and egoistic, but he’s also highly creative and bright. Not such a bad combo. I told one group that I created Max with pieces from every man I’d ever known. They laughed, but I think that’s close to true.

6. What elements are in the books beyond a good story?

Neat, exotic locations. I actually didn’t realize when I began the series with these “Hollywood people,” but they allow me to logically place the stories absolutely anywhere. They’ve gone to Guatemala, and on location in Panama, and spent time in England. The world is their playground, as well as their workspace.


7. What’s the funniest thing that’s happened to you as a writer?

When I killed off half the characters I’d been happily writing about. This was midway through Extreme Cuisine, the 5th in the series, and my then publisher was having a hard time with the business (Indies have a high attrition rate) so I decided this would be my last in the series and killed off three continuing characters. Then the series was picked up and I had to invent new ones. Served me right.

8. Which comment on your work do you still think about?

I do a lecture a year at a San Francisco Bay Area college in their English Department. Last year, the professor introduced me and said, “Why, Kit, when I was reading The Fat Lady Sings, I felt as though I was reading a NOVEL!” The students sniggered and I said, “Well, you were—a MYSTERY novel.” Jeesh! God save me from these overly analytical, deconstructionist English teachers!

Sure, I think most authors can’t resist a dig here or there at something in society that they don’t like. I’ve featured Latinos who have “made it” big time in our difficult culture. I come down on ignorant people, people who don’t even know they’re making horrible decisions. In the latest, soon-to-be released The Magicians, I put my characters in the middle of a reality TV fiasco because I truly loath the concept of reality TV. Also bizarre religions are fun to poke a bit of fun at and I’ve done that, too, taking a jab at Scientology in Location Location. I think it’s okay to vent in a gentle, storytelling kind of way.

10. What is most fun about writing your stories?

Finding the “right” title, picking the aphorism that will lead off the story, and naming the characters. My favorite character’s name is reserved for a Hollywood agent, Venus Stromberg. I first heard the name on the radio. It was the weather gal! I also love the name of our host, Nigel Bird. Hmm, that name will probably end up somewhere.... Great names make for fun characters.

Reality TV? Sounds like a piece of cake to Maxa guilty pleasure for viewers and a windfall to producers. What can be difficult about reality TV? But transported from the eerie confines of a seemingly haunted house in Los Angeles to the sun-drenched, volcanic beaches of Hawaii, Margot and Max discover that the images manipulated for television reality shows are no more realand can be much more deadlythan the stories she and Max create for feature films."

You can read the opening chapter of The Magicians over at: