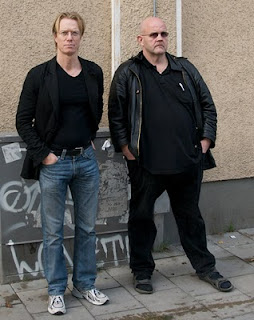 Here's something out of the ordinary. A duo who write novels. It's a great interview.

And, just from looking at the picture, which of these guys would you take on if you had too?

They both look pretty hard to me, but yours is the big guy.

Good job they're so lovely underneath that tough exterior.

Welcome guys, OK to ask you both at the same time?
No.
No?
No.
OK ... why, exactly?
Since we never agree on anything.
Hm ... I thought ... well, that you worked sort of ... together?
You thought correct.
But you never ...
We never agree.
Never agree ... and five books?
We meet almost every day. One with much too long hair and the other without. One skinny junkiestylelike, one slightly bigger. We are not twins. And we never agree. The five books ... no idea to start explain, really.
OK, you meet every day for work. And your spare time?
Never.
Never?
Anders once was allowed to visit Börge when he turned fifty. He stayed for two hours. That’s all - for ten years.
And ... again, why, exactly?
We fight a lot, we shout a lot, in our spare time we need the space.
OK - now, let’s get serious. Anders, OK to start with you?
Five questions. Then five to Börge.
Ready?
Shoot.

1. About dancing with yourself - your Detective Superintendent Ewert Grens, he does that a lot, dances with himself?

He does. He sleeps in his worn out sofa in his office, and now and then he gets up, puts on an old Siw Malmkvistsong from the Sixties, and dances in the middle of the room, his arms around no one, remembering a time when everything had a purpose.
Siw Malmkvist?
The tears I cried for you could fill an ocean - The Swedish version of ‘Everybody’s Somebody’s Fool’ - But you don’t care how many tears I cry ...
OK. I get it.
2. How do you come up with the plot for your new novel?

The starting point is always that the story has to be credible, entertaining, with several twists and an unexpected ending. Better than anything else we've read ourselves. If we don't think it makes the mark, then we have to rework it. And rework it. The story is always number one. Then, and only then, when the story is in place, we link it to a topical issue that we know more about than any other author, and where we have the best contacts. The realism that we provide for the reader is a bonus.

3. Three Seconds explores drug dealing in jails. Was this an issue that stemmed from your respective experiences?
I worked for many years as a journalist in prisons and a probation officer for prisoners with the longest sentences and most serious convictions. Börge has been in prison himself and also been a drug user for a number of years. So together we have a vast reservoir of knowledge. From two different angles. We always say our books are fifty per cent fiction, fifty per cent reality.
Piet Hoffman, the main character in Three Seconds, is a CHIS who actually works for the police, but becomes king immediately in Aspsås - our fictitious prison in the book.
He becomes king when he takes control of drug dealing in Aspsås. That is exactly how it works in reality. The person who controls the drugs always has the power inside.
You are at the top of the hierarchy, even though you might not be a murderer or armed robber - who are otherwise the ones at the top. At the bottom of the pile are grasses and sex offenders, the pariahs of prison.
It's the same in all countries, all over the world. The problem with drugs in prisons is, among other things, that it interferes with the rehab programmes that are run in a number of prisons. So prisoners who might want to go clean can't do it as long as drugs proliferate in the prison. And as long as a prisoner is influenced by chemicals, in other words, represses any feelings and doesn't feel anything at all, he or she cannot understand his or her behaviour, change that behaviour, and thus fails to understand the consequences of that behaviour, how it hurts others, so when they are released, they have not been rehabilitated, and continue to commit crimes and add to the number of victims.

4. Did you know Stieg Larsson?

My contact with Stieg was very important: I was for a long time publishing investigating journalism about extreme rightwinged organizations. At one point I was on top of their ”Deathlist” and was physically abused, became the ”threatend tv-man” in all papers, I had a bodyguard, I was living in hotels without an address, and as soon as my new number och address was known I got more death threats. At that time I contacted Stieg since he had been around the same thing, and had knowledge I needed. We shared this problem, we worked it out together.

5. Last question for you, Anders. Describe Börge in one word.

Not possible.
Try.
He is so much different from me.
That was many words. Give me one.
Patient.
Patient?
He is the most patient person I have met. Never mind what I say, how much I shout and scream, he just looks me, waits until I am done. So, so patient.

OK Anders, thanks, now over to you, Börge.

I´m sorry.
Why?
Giving Anders permission to stay on my anniversary for two hours.
Why?
It was far too long. Two hours in ten years. We are not made to socialize with each other for such a long time.
What do you mean?
God always has a meaning with every person he creates. I think he’s purpose creating me and Anders were that we should write books together. Period! Don´t you two socialize in spare time. Anyway, if we had socialized off work we would drive each other crazy.
Enough talking, first question.

6. Would you like to tell me about your time as a criminal and a drug addict?

Well, it´s a long time ago now. I was young and I was a fool. Today I have been proper, clean, and sober, for so long that I am a fully accepted member of society. I have a driving license, gun licenses, I am a probation officer for some guys, I am a juror in Immigration Court in Stockholm and also a member of the Police Board in Stockholm. Today I am a winner. But if I should tell you what it is like to be a criminal and a drug addict … it is not fun. It is a life for losers. I was such a loser. I was the only one who did not understand.

7. Three Seconds reveals a lot about Poland’s drug factories. Is that a part of the fifty per cent reality you always talk about?

I have known for years that Poland is both a transit country and also a land of many amphetamine factories. I blame my messy youth for that knowledge. In addition you have many different types of amphetamine in Poland. We tried to show that in the book by having them producing “Blossom”, an amphetamine based fertilizer. Fertilizers are very dangerous, not for the fields and meadows and lawns, but when manufacturing drugs and explosives from it.


8. The main character in Three Seconds Piet Hoffman / Paula is a very complex person. He´s both a criminal and a beloved father.

We write fiction in order to entertain. Our characters are created from unique persons only we have access to and that´s how we work. Our books are fifty per cent reality and fifty per cent fiction. What percentage is what is for the reader to find out.

9. Would you care to explain how the collaboration process works?

A fair question … but no. It´s the only thing we never share with others. Apart from that one we answer all questions so … next question.

10.OK, last question for you, Börge. Describe Anders in one word.

It´s impossible. He is so much.
So much?
Too much …
Too much?
Just kidding. He is so much.
How do you mean?
A guy with all feelings on the outside.
Happy, angry, sad, mind reader, just name it.
One word that comes to me is fair (loyal).
Please don´t tell Anders. It will go to his head.
http://www.roslund-hellstrom.com/
Posted by Nigel Bird at 08:58