The Guardian Newspaper On Books 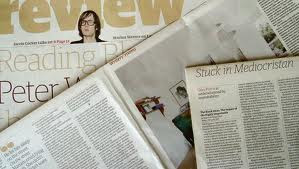 The main focus of this post is to draw the attention of those who adore the short story form to a series hosted by The Guardian newspaper.

Before I do that, however, I'd like to have a little pop at them.

It's a newspaper of an amazing tradition. The journalism is of the highest order and the breadth and depth of its stories never ceases to amaze. You only have to read some of the sports reports to feel the quality of the writing.

Before the internet, I was never much of a paper reader. I have issues with the way my eyes scan texts which make the thin columns of print extremely frustrating. Even so, it's the Guardian and the Observer that I'd go for if I'd forgotten my book before a long train journey or on the pre-children days when browsing their papers at the weekend was a treat.

Where I think the Guardian / Observer productions, I do get frustrated by their coverage of the arts. I know that I'll take some flack for this, but I'm going on anyway.

Mainly, I'd focus on the book pages.

They're like an academic's paradise. Many of the reviews are so in depth and full of the reviewers desire to show off their own knowledge that navigating through them can be like eating dry cream-crackers.

It's not just the style I have an issue with either.

It is a guardian, in many ways, of the established order. It plays safe too much of the time (I can imagine those whose idea of being radical is to be seen in public without a white fedora). Its roots, rather than heading deep into the ground to discover and unleash exciting new talent or ideas, grow sideways - feeding of the mainstream, telling us what's going to be big because that's what the bigger publishers are telling them.

I'd like to see them do what they should as true observers - look everywhere, upturn stones and not rehash ideas like they're a talk show that throws things out for discussion on a cyclical basis.

Of course I'm not really qualified to criticise too deeply. I'm not clever enough by half, not in the same game as they are.

I would like to think that those from the arts pages will look into their fields with the tenacity of some of their investigative journos on the news pages.

Slating coming to an end, I must also congratulate them for throwing out pearls on a fairly regular basis.

It's lovely that poetry is always present. There are regular reviews of crime. There are great pieces on great writers from the past and the present that are outstanding. On occasion, pieces are so cutting edge one should really wear gloves to turn the page.

And here's another thing I'd like to flag up.

They're running an audio series on great short stories chosen by fine authors and read by them. The voices are, at times, incongruous with their text, but never mind.

From Carver to Carter: authors explain their choices.

It's a cracking series and I'm not knocking it. I'll make sure I listen to them all.

You might, however, have guessed my stand before I mention it.

These are great pieces, real gems, but where are the stories I've been reading all year? Hundreds of them. And I know you've read hundreds more than me. I limit my focus these days, but the world of contemporary work is at their feet and is completely ignored. It would be wonderful if some of those best works we given space and time at a newspaper of the Guardian's stature and quality.

Even the Mail On Sunday, I hear, is putting up a short story by a young dude called Mr Rankin - watch out for him.

Isn't it about time the Guardian became the champion of the little fish? Couldn't they print a short work from a newcomer every week? Run a competition that was worth its salt? Use poetry from the street and the gutter as well as from the Poetry Society's list?

Summary - could do better

I'll help them out right now by advising them of a few places to look:

http://death-by-killing.blogspot.com/ (Bill Crider will have you under your seat this week)

and that's but a few and just from one small slice of the huge cake that is fiction.


Enough from me - go and enjoy those audios.
Posted by Nigel Bird at 09:48