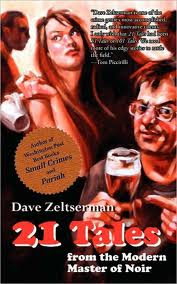 A quick plug for a mighty fine writer. On Monday, if you pop over to http://www.theauthorsshow.com/ you'll find our friend Richard Godwin being interviewed.

I've had the pleasure of some fairly regular contact with Richard of late - he's been here at Sea Minor and I was over at The Slaughterhouse for a Chinwag only a couple of weeks ago.

Thing is, I don't know what his voice is like. I'd lay money he's got rich, deep tones, the sort of voice you'd hear doing a trailer for a horror movie. I'm going to be there to find out - no matter what the sound's like, the words will be worth hearing.

Meanwhile, over at Day Labor, Brian Lindenmuth picks a book of the year from an 'Allan Guthrie with ovaries', which has got to be one of my favourite lines of the year, too.

And to the main event. It's a real honour to have one Dave Zeltserman here today. Tighten those seatbelts guys and gals, we're off :

Where Dave Zeltserman has a schizophrenic break and talks back to the voices in his head:

Q: Congrats on winning the Shamus Award for you novella, ‘Julius Katz’. I understand there’s a Julius Katz novel in the works?

A: Yep, already written, and it’s good. Feedback I’ve gotten from Julius Katz fans who I showed it to has been great. So keeping my finger-crossed.

Q: You just put out your first original e-book, ‘Vampire Crimes’. What’s it about?

A: Vampire Crimes is a kick-ass, high octane thrill ride of a book, easily the most noir book I’ve written, think Pulp Fiction with vampires. Anyone who likes Small Crimes, Pariah, Killer or Outsourced, is going to really dig this book, especially with a $2.99 price. I have to believe this will find its readers.

Q: What else is in the pipeline?

A: Essence will be published by Overlook Press in the Fall of 2011, and I’ve completed two other books that I’m excited about, Monster and Murder Club.

Monster is easily the best book I’ve ever written and will ever write. It’s not crime, but instead of a retelling of Mary Shelley’s Frankenstein, where I layered the book very carefully over the original, but in this version I have the monster as a tragic and heroic character, with Victor Frankenstein as a depraved villain who is in league with the Marquis De Sade to bring hell to earth. But again it’s layered very closely over Mary Shelley’s original brilliant novel, where the same journey is taken, but each path of the journey for very different reasons.

Murder Club is easily the best crime novel I’ve written. Very dark, very noir, and as much about the coldness and isolation in modern society as it is a crime novel.

Q: What about your next book, Outsourced. It’s being published now, right?

A: It came out in August in the UK, and will be published in the US this coming February. It took six years, but am very happy to see it in print, and am very thankful to Serpent’s Tail for publishing it, as well as publishing Small Crimes, Pariah and Killer. It’s also got foreign deals so far with publishers in Germany, Netherlands, France and Lithuania.

Q: How’d you get a film deal already if the book still is several months away from being published in the US?

A: My agent back in 2005 sent the book to a topnotch film agent, Steve Fisher at APA. Steve’s someone who doesn’t take on much, but when he does find something he believes in he pushes the project until he gets a deal. I have a feeling that Steve thought the literary rights for Outsourced would sell quickly, because it makes things a lot harder to get a film deal when you don’t have a book deal, but even without the book deal, there was a lot of interest in Hollywood from the very beginning, and a lot of different deals almost happened with it over the years, including a cable series.

I wrote Small Crimes in 2003 and didn’t sell it until 2006, and I had a lot of low periods for a few years with the difficulty I was having selling both Small Crimes and Outsourced, and the interest from Hollywood for Outsourced kept me from quitting writing during this time. John Tomko, who produced the movie Falling Down, was sold on Outsourced from the beginning but things finally broke in 2008 when the Impact Picture guys got involved-they’re the ones who make the Resident Evil movies. What really helped was Small Crimes being named by NPR as one of the 5 best crime and mystery novels of 2008—I think that’s what cinched the deal with the financing people. I know writers aren’t supposed to count on Hollywood, and things can take forever there, but I think this movie is going to get made. We have the financing approved and a script that’s not only been accepted but has tested off the charts, and now it’s a matter of getting the right director and actors. So I’m very optimistic about this.

A: Well, I never robbed a bank, or entertained thoughts of doing so, but in some ways this was the crime novel I was born to write. My mom insists that I based the main character on myself. I didn’t, at least not entirely, but I will say this, the group of oddballs and misfits that I create in this book, while maybe not based on any particular people I know, could easily be folks I’ve worked with over years. Outsourced is a different tone than my ‘man out of prison’ noir books. While it’s violent, and there’s certainly some darkness to it, it’s still lighter and has more humor than those others. This wasn’t anything I was consciously aware of while writing it, but my agent back in 2004 told me he thought it read as a mix of Richard Stark’s Parker and Westlake’s Dortmunder books, and I think he’s right.

Q: You mentioned Essence earlier. What’s that one about?

A: The title might be changing to The Essence of Monsters, not sure yet. I’m a Red Sox fan, and I had a lot of fun centering the book around the 2004 ALCS Championship series between the Red Sox and the Yankees. The book’s protagonist is a Brooklyn homicide detective, and we get to watch the Yankees monumental choke job through the eyes of a diehard Yankees fan. The book is very moody, very atmospheric, and while it’s a crime novel, it’s also very much a novel about confusion and chaos. I’m extremely happy Overlook is publishing this one, and it’s very different from my other crime novels.

Q: The Caretaker Of Lorne Field was just nominated by Dark Scribe Magazine for their Black Quill Award for best dark genre novel of the year?

A: Yep, and to do some name dropping they’ve put me with some very stiff competition, including Stephen King’s Under the Dome, Peter Straub’s A Dark Matter and Justin Cronin’s The Passage.

Q: Your favorite reads so far this year?

Wake Up Dead by Roger Smith, a very violent South Africa Cape Town thriller without the usual cartoonish elements of a lot of violent thriller. This book reminded me what I like most about Elmore Leonard. No Sleep Till Wonderland by Paul Tremblay, which features his narcoleptic PI Mark Genevich. In other writers’ hands, Genevich could’ve ended up very cutesy, but Paul plays it straight and has this wonderful voice. This and The Little Sleep are the Boston PI books people should be reading and talking about! Galveston by Nic Pizzolatto, which is a wonderfully dark noir debut and I highly recommend it. Also Florida Gothic Stories by Vicki Hendricks, which is just this very fun and perverse collection of noir/horror stories.

And when you get back, get straight over to here -

where David Cranmer of the almighty Beat To A Pulp has an interview up that you should see.