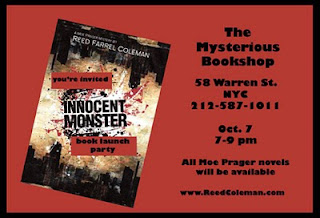 For those who've been regulars to the series, you'll know that Emma Donoghue posted an amazing interview with herself a couple of weeks ago.

As a build up to the Man Booker prize announcement, she'll be reading at a couple of events.

The first is with the other shortlisted authors at the Royal Festival Hall on Sunday 10th
http://www.southbankcentre.co.uk/find/literature-spoken-word/tickets/2010-man-booker-prize-readings-54415

and then she's on her own at The Roundhouse on Monday 11th:
http://roundhouse.org.uk/whats-on/productions/emma-donoghue

I lived in London for many years and miss the city often, especially at times like this. If I had to choose an event from the two, I'd plump for the Roundhouse - it's a place of legend and is a quite beautiful building. The Royal Festival Hall isn't bad either, come to think of it.

It's almost impossible for me to be there, but I'd encourage anyone with free time who's in the vicinity to go to one or other.

They both have books hot of the presses and they're even appearing in a few events together (see yesterday's post for further information).

There are a few differences, too. Read on to find out.

I'm thrilled to have him here.

Reed Farrel Coleman Asks Reed Farrel Coleman Ten Questions He Wishes He’d Been Asked
1. Everyone asks who you read and who influenced you, but who continues to influence you?
I think everything I read influences me. I hope I never stop growing or get to a point where I feel I’m beyond improving. There are some people I read and am enamored of their work, but whose styles are so different than mine that I don’t think I’m capable of incorporating what their work offers into my own. Specifically I’m thinking of Daniel Woodrell and Megan Abbott. In some ways that’s a relief because I can simply enjoy their work and get lost in it without any pressure. On the other hand, when I read Don Winslow, Philip Kerr, Ken Bruen, and Peter Spiegelman, I am studying as well as reading. Lately, I’ve been experimenting with Don Winslow’s narrative style. I don’t know what it will do for my prose, but it’s had a profound effect on my poetry.

2. Innocent Monster is the title of your latest novel in the Moe Prager series. Where did that title come from?
To paraphrase WH Auden, if you love playing with words, you have a chance to be a good writer. I love playing with words, juxtaposing them, creating oxymorons, puns, etc. The phrase Innocent Monster just popped into my head one day. I know it will strike some people like the phrases jumbo shrimp or elevated subway, but it’s deeper than that. I toyed with the notion of what those two words could mean together and from there came the idea for the book itself. Try explaining that the next time someone asks you where you get your ideas from.
3. Innocent Monster is book 6 in the series. What keeps it fresh for you?
My protagonist, Moe Prager, keeps it fresh for me. Moe ages as the series progresses, therefore I have to change as Moe’s life changes. Innocent Monster was a hoot because Moe is in his early 60s and has to deal with the vagaries of aging. He now lives in a post-9/11 world and that’s been an adjustment for him the way it’s been an adjustment for everyone.
4. Does Moe have a future?
I am currently writing Moe 7, Hurt Machine, and in it Moe is faced with the most serious issues he’s ever had to deal with. Writing it has been great. I’ve been at it about a month and have over solid 60 pages done. I don’t have a contract for it yet, but I’m confident that the reaction to Innocent Monster will take care of that. What’s great about the series for me is that some of the books appear complete in my head while others develop in their own ways. Walking The Perfect Square and The James Deans popped into my head of a piece. All I had to do was write them. Redemption Street came to me as part theme and a way to deal with an incident that occurred during my years in high school. Soul Patch came out of my own personal darkness. Empty Ever After was unique in that it was the book that involved the most calculation. To keep the series fresh, I had to move it away from where the previous books had gone and if it was the last in the series, I had to give fans a book that wouldn’t leave them feeling cheated. Innocent Monster was a product of its title and Hurt Machine totally sprang from me asking a what if question of myself. I just sat down and began writing. Moe will have a future as long as I enjoy writing him, fans enjoy reading him, and someone pays me.

5. What’s with the poetry?
Poetry was the first kind of writing I was serious about. I grew up in a family with my parents and two older brothers. We communicated by screaming at one another. I mean it’s really how we expressed everything, even love. There was a lot of anger in my family. I was an angry person. So, we were loud and angry and our communication with each other just became so much noise that no one heard anything. By the time I was twelve or thirteen I was desperate to find a way to communicate to be heard. Poetry saved me in a way. Then, once I found out that I could express myself that way, I found I was really interested in how other people who wrote poetry expressed what they had to say. I fell in love with the rhythms, the uniqueness of one poet from the next, the economy, and the power of it. I studied poetry in college, but realized I’d never be great at it. Strangely, in mystery writing I found my niche, a place to use what I’d learned about poetry to better effect. I’m writing it again and am now a co-editor of The Lineup, a magazine featuring poems on crime.
6. Why does Brooklyn mean so much to your work?
7. If you were told tomorrow you could no longer write, but that you could become one of three other things, what would they be?
A pianist
A chef
A pitcher
8. If you could have dinner with three people from history, who would they be?
Moses
Shakespeare
Leo Szilard
9. Do you have a book in your head that’s eluded you, but that you feel you have to write and will write someday?
Posted by Nigel Bird at 12:21