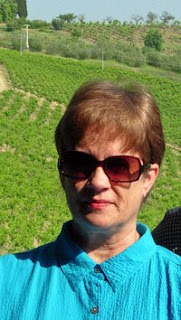 Here's a lady who has her fingers in lots of pies and every one of them's delicious. Come and take a bite. Patti Abbott.

Why would we be interested in the facts of your life?

I certainly wondered about that myself and had, in fact, considered using the facts of someone else’s life to rouse more interest. I had Mary Robert Rinehart picked out since we were both born in Pennsylvania and she seemed obscure enough that anyone reading this might mistake her life for mine. Would you have bought that I created the “Had I But Known” narrative? But since I’ve never read a book by Ms, Rinehart I felt it would be too difficult to pull off. I had also chosen her because I liked Oscar Wilde’s quote—that she put her art into her lifestyle rather than her books. What writer of dozens of books wouldn’t be flattered by that statement?

No, seriously, why would we be interested in the facts of your life?

Seriously? Okay, my greatest achievement before quite recently (other than quitting smoking) was producing two amazing children and marrying an amazing man. For years I thought it was quite enough that I had done such a thing. Especially after my mother leaned into the car about to speed us away from our wedding reception and said, “I give it six months.” How many can choose well at nineteen and birth well at 22 and 23. So I basked in these accomplishments until two of those accomplishments were gone. There was no more strutting around at PTA meetings, baseball games and awards nights after that. I went back to a few the next year and frankly people stared at me and asked if my children hadn’t graduated. After acquiring a prescription for xanax, I thought maybe I should do more than make quilts and bake bread. Unless I could find a sixties commune and I couldn’t. It was 1994 by then.

Why do you waste so much time blogging and reading blogs?

Didn’t you read the above? I quit smoking, and with no cigarette break, what’s a girl to do? I go read a blog or the comments on mine when I need a break. Unfortunately I used to smoke a lot so those breaks come often. I like blogging. My kids always said I could ask more questions in five minutes than any talk show host and my blog is mostly about asking questions. When I get really antsy I go ask questions on facebook.

Why the hell does everyone ask me that? I especially resent being asked that here. Actually I’ve written two novels, both proclaimed brilliant by my husband and close friends. So far no agent has agreed to rep them although I give up rather easily. Ten tries on the first one and I ditched it. In the long run, I feel I write stories between 2500 and 4000 words best. I have little to say so why keep on saying it? And it doesn’t help that both novels fall uneasily between crime fiction and mainstream novels such as they wrote in the sixties.

What do you read?

I spend an awful lot of time reading magazines. My husband and I are addicted to getting things in the mail and there are not a lot of letter writers out there. Magazines are so desperate for subscribers now, they practically give them away. Getting magazines written chiefly for the people in various cities is quite enjoyable. I really love reading reviews of plays in places like St. Paul and Portland. And I am quite up to date on restaurants in Albuquerque and Burlington. We easily get 20 magazines a month—four cooking ones alone (that’s my husband, not me). Aside from magazines, I read online zines and lots of novels and anthologies.

Why did you start Fridays Forgotten Books?

Because there are so many forgotten books. There are more forgotten books than remembered ones by 100-1. Bringing those books to light could keep me busy for a while. I’ve talked about this in other places but here’s a good opportunity to thank those people who have contributed pieces to this project. Blogging can be like doing a “Sally Draper.” (Does anyone get that reference?) So I was looking for a way to slap that hand away.

Do you really think you are competent to write movie reviews?

Not at all, but the sheer number of movies we see impressed Jeremy Lynch on Crimespree Cinema. He couldn’t imagine getting anyone else to see 1-3 movies a week. People are always asking me how do you make the time to see so many movies? And my response is that four hours a week does not seem like a lot of time. Plus the only good popcorn is at movie theaters. You may settle for that microwave crap, but give me the 800 calorie version at most movie theaters. I almost never watch movies on DVD or TV. It is too easy to pick up a book or go check my email.

Where do you envision yourself ten years down the road?

How did you start writing?

Good question. I was well into my thirty-year degree B.A. program by then and a course I had signed up for on the American Indian looked too damned hard. It had like eight books and three papers—a new professor had come from Yale with visions of making our school a little Yale of the Midwest. So I dropped that class and the only class fitting into my schedule was on poetry. I didn’t realize it was a class on writing poetry and not reading it until the third week or so. I thought other students were just obligingly supplying the instructor with some text until our books came in. And suddenly it was my turn and I found out how easy it was to write bad poetry that semester. But some wise person said, “Hey you know, your poems might make good stories.” So I tried that and here I am.

For those here because I am Megan’s mother—Did you always know she would be a writer?

We have a cassette of Megan saying she’d be a writer at age seven. Amusingly, she blamed her lack of success at age seven on the fact we had not bought her a typewriter.
Actually, I thought she’d be an artist. She drew constantly as a child. I have boxes and boxes of her drawings. But when I look at those pictures now, they always have narratives to them. They even have words a lot of the time. Captions above, or you can follow the story from frame to frame. I just didn’t see the words for the pictures until later. My son also said he wanted to be a lawyer at around that age. I was the only one who drifted through life ambitionless. But enough about me.

Enough about you? I don't know about anybody else, but I could certainly go another couple of slices.