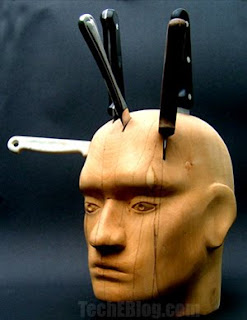 the following post is by a man of many talents. looking for the new breed, look no further

Archie Daggers didnt know anything about dying but he knew a dead man when he saw one. Or at least he thought he did. This being a dark alleyway and a crumpled face-down body blurred into a cobblestone puddle, what other possibilities were there? Like whoever he was had belly-flopped into a pool too small for him, water seeping out of his edges.
He gave him a kick anyway, just to make sure, a tin can flick making no impression. His second kick had a bit more backlift but the mass of flesh and bone under the overcoat didn’t flinch an inch. It was like taking a penalty with the ball glued to the spot. This must be why they called it dead weight. Three goes for a pound Archie thought, but his ankle felt not too far from a sprain just two kicks in so he didn’t bother. Wasn’t like the body was going anywhere, was it.
What would a police officer do, he asked himself. No sign of a struggle. No glint of a knife in the pattern of puddles surrounding his new-found friend. Not much inclination to try and flip him over to see how mashed his features would be. How would the crime squad draw a silhouette in this wet and windy weather? Did they have waterproof chalk? He’d end up looking like the touchlines on his local sunday league pitch, wavy as a drunkard’s walk thanks to the pickled groundsman. Number of times there’d been a right fracas over what was a corner kick and that never went out ref. All depends on where you looked at it from. White lines don’t do it, it’s all in the mind. Is that the best outline you could manage, P.C. Dabble? A three-year old boy could do better than that. Go get me a three-year old boy.
He should really sneak a peek inside the pockets while he could, lift his wallet, maybe a phone, but this was one big fellow and his long overcoat hugged him like a roll of carpet, he’d have to shift him onto his back to get a proper go, and he really didn’t fancy that. Not squeamish exactly, just a little spooked. He could take his boots, nice leather soles, shiny in the rain. But they looked a few sizes too big for him and what would he do with them anyway? Sell them down the pub? And then the next day’s Evening News would read Bloody Big Corpse Found In Alley Wearing Burlington Socks and all heads in said pub would turn to Archie as if to say where did you get those boots again?
Archie noticed he was feeling a lot calmer than when he first spotted the shadowy slump of a man round the corner from his corner. His heart wasn’t racing any more. It was just a dead man in the alley, fallen from the sky or left there to die. No fountain of blood, no clamouring of hounds tearing at the poor sod’s trousers. The whole thing stank of anti-climax. If this was opportunity knocking, Archie wasn’t answering the door.
Posted by Nigel Bird at 23:28