DANCE WITH ME FATMAN? 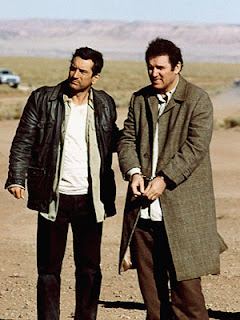 Tell you straight, this bounty hunter thing aint nothing like it is in the movies.
There’s no buddy-buddy shit. No good guy/bad guy thing. Just two fellas from the dark side stuck in the same place.
Take me and Eddie Mailman.
Twice he took me in.
Third time he tried I was in New York.
Hadn’t changed much, except there was more of him to go round.
I sat in JFK chained to his wrist wondering how I let such a no-good sloth catch an athlete like me.
No way he could disguise himself. Would have been like trying to hide an elephant in a salad. And creeping up? Imagine a hippo in sneakers.
Only way to get me was for me to go walking right in to him.
And that’s what I did.
=========================================

I opened the door to room 301, a belly full of Jamieson’s and a pricey dame on my arm and there he was, legs spread, a shotgun resting on his knee.

The girl weren’t stupid. She was out the door before I could utter a word.

I collapsed right between his knees.

“Nice to see you, Willie,” he said grinning through his stubble.

An almighty explosion ripped between his legs. Sounded like the devil tearing a directory.

“Pick the bones out of that son,” he laughed and, while I was trying not to pass out, he must have popped on the cuffs.


Mailman had done his party-piece already.

Took the key to the cuffs, dropped them in an envelope and sent them on over to the bondsman in Fresno.

He loved it, I could tell, sensing the penny drop on my side of the chain.

The word privacy had just been rubbed out of the dictionary.

In the lounge at JFK, Eddie’s buttocks rested over two seats while I squatted on the floor like a dog.
“Got to take a dump,” Eddie said.
“You take a dump that’s murder, scrote.”
He gave a yank of the chain and pulled me onto my feet. “Ever tried fitting a fat man into an aeroplane john?”
Worst thing about being hauled by the Mailman was there weren’t no way you could hold on to your insides for as long as he had you. By the time he took you in, you was practically begging to get behind bars and have yourself a good squat.
I’d been holding in for a good hour, but it looked like I’d been wasting my time.
He wiped the burger slime from his mouth, balled the wrapper and scored two points for the Knicks.
I was about to go where plenty had boldly been before.
Seems I wasn’t going fast enough for Eddie. He pulled me hard and I fell into his chest.
“Dance with me fatman?” I asked.
He pushed a finger up my nose. Lifted me up by a nostril. Made sure my head followed his hand.

“Only dance I’ll be doing is the Tango all over your frigging face.”
I followed him like a bull being pulled by the ring.

At lease we got the disabled toilet.
Eddie undid his belt with his right hand, loosed his waistband and slipped out of his jeans.
I got a flash of turkey-neck and screwed my eyes shut.
Sounded like someone hadn’t been eating their vegetables way he strained.
Grunting like a pig he was and grinding his teeth like he was having one big nightmare.
No matter how hard I tried, I kept getting little pictures in my mind. Got so bad I had to open my eyes to see what was going on.
He was really sweating under his hat. I guess it was what you’d call a ten-gallon - always fancied himself as a cowboy, Eddie, even if there weren’t a horse alive that could cope with him in the saddle.
So there I was waiting for the splash when a look of fear flashed on in Eddie’s eyes.
With his free hand he took a hold of my collar and squeezed like his buttocks had been doing since he sat down.
Then his fingers went for my throat. Gripped on like someone was trying to take his last double-cheese.
Felt my eyeballs turn into my head and things went dark.
And he just let me go.
Never saw a man have a heart attack before then. Haven’t seen one since.
Wasn’t like I imagined.
He just slumped where he was, like a bouncy castle that went and lost its bounce.
So there we was, just me and the fat man.
Did I panic? Yeah, I guess I did for a while, but soon as I got the inspiration I was as calm as Harry Houdini.
I gave the emergency cord a pull and waited.
Took no time at all for the attendant to get the door broke down.
Should have seen his face. Guess it aint often a man gets to see a pair of butt cheeks that size mooning right at them.
Positioned him like that to make sure he weren’t seeing anything else but that ass. Funny how we can’t stop looking at the things that make us freak.
Rest was simple.
Introduced myself as Skinny Ray, bounty hunter. Pointed at the corpse.
“This here was ‘Ruthless’ Joe Finney. Bounty says dead or alive, so if you wouldn’t mind, sir.” I looked down at the cuffs and held them out. “Always mail the keys just to be safe.”
The old guy took off his cap. Looked at me and scratched his head. “Boltcutters?”
It was my turn to nod.
The man disappeared to get his tools.
I sat on Eddie Mailman. Wished you could still smoke in an airport lounge. That crack of his would have made the perfect ash-tray.

http://danielboshea.wordpress.com/2009/12/15/crash-and-burn-the-steve-weddle-memorial-airport-flash-fiction-entries-auger-in/ for more airport tales.
Posted by Nigel Bird at 10:32