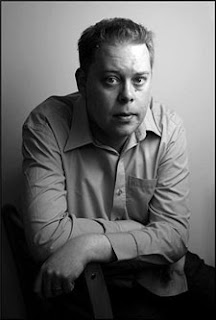 When I was editing the Rue Bella magazine, we published a poem called 'Hull Is The End Of The World' by Ian James.

For today's guest it's the place he calls home, like it or not.

It’s well documented you’re a football fan – or should I say, a Hull City fan, yet your protagonist in ‘Broken Dreams’ is a former rugby league player. What’s the score with that?

That’s totally true. Aside from the Saturdays when I was playing the beautiful game myself, I’ve stood and sat at Hull City games man and boy. I knew when I was sketching out Joe Geraghty that I wanted to give him a sporting background which was ripped away from him at an early stage of his career. The temptation to make him a former footballer was immense, but I had to make a decision to serve the book. Rugby League has always played a massive part in everyday life in Hull, and although its popularity is maybe on the wane, the fact the city has two massive clubs gives me an additional angle to play on and add a bit more depth to the writing.

Do see yourself written a series based around Geraghty, or will you branch out?

I think the honest answer is to say that I don’t know. The next Geraghty novel, ‘The Late Greats’, is substantially done, so it feels like I’m now starting to reap the rewards of the groundwork I’ve put in. Certainly the book after that is looking like it’ll be Geraghty, but the storyline feels very organic and a natural progression for the characters. I think the trick is to keep things interesting for yourself as a writer and being able to recognise when you need to take a step away to keep things fresh. Michael Connelly is very good example of this. At the moment, I’m happy with Geraghty, but nothing’s set in stone. I like the idea of different characters coming to the fore, but having Geraghty going about his business in the background.

You seem to be developing a habit of borrowing song titles for stories. Is music important to you? How about films?

It does seem to be something I’m doing more and more....but yes, music is a massive influence on me as a writer, though maybe not directly. I think the seed to get up and do something and not just sit on your arse, expecting the world to offer you something was planted initially by musicians like Billy Bragg and Joe Strummer. To be fair, it lay dormant for a while, as I was happy playing football and going out drinking on weekends, but I also spent a lot time watching my friends in bands self-release and promote their own records. I think their attitude was a massive help to me in finding a way forward for myself when I needed it. Films have never massively interested me as an art form. It’s always been about music. I enjoy the cinema as much as the next man, but the mechanics of film making isn’t something which massively excites me.

People often ask what the best part of having a novel published is – what’s the worst?

The vast majority of things connected to having a novel published are great and it’s a huge privilege to have someone show enough faith in you to make it happen. The worst part, and I suspect I’m not alone in this, is the continuous self-doubt. I can’t imagine that I’ll ever be totally satisfied with what I produce. I think if you start feeling self-satisfied, you’re done for. It sometimes feels paralysing, but it also drives me on to try and produce better work.

How important has the Internet been to you as a writer?

Massively important. And not just the Internet, but technology in general. The thought of writing a novel by hand or typewriter makes me feel physically ill! The Internet has let me plug into a crime writing network and share my work and that support continues to spur me on greatly. I think what surprised me most was not just thinking internationally. The Internet has also brought me into contact with writers who live in my home city of Hull, so it’s also impacted on my ‘real’ life, too. The opportunity to reach readers through the many fantastic websites has always been an important factor, and something I’ve tried to build as I’ve progressed.

The short story or the novel?

I started off by writing short stories, and even though I write the occasional one, I think of myself more as a novelist. The progression always seemed natural to me and it was something I was aiming for. I was using the short story to equip myself with the tools to write novels, and looking back, that was probably a mistake in some ways. I don’t regret learning the discipline of crafting a piece of work, but I’ve come to learn there’s a significant difference between the two forms. It feels like I’m improving and producing better short stories, but I tip my hat to the likes of Paul Brazill and Ian Ayris. As a reader, I very much lean towards the novel, but the short story is a great way to discover new writers. I do most of my reading on www.bykerbooks.co.uk, www.thrillskillsnchills.blogspot.com and www.a-twist-of-noir.blogspot.com.

You’re a crime writer – do you write in other fields?

Not in terms of fiction. Crime writing does everything I want and lets me explore the situations and issues that I want to look at. Away from crime, I write the occasional book and music review, though not anything as regularly as I used to. It’s more a case of trying to promote things I really like in an attempt to spread the word, though I recognise that it doesn’t make for me being a great reviewer. I occasionally contribute to a Hull City fanzine and turn my hand to the writing of guest blogs, so it’s nice to do a few different things. Since ‘Broken Dreams’ was published I’ve had a few interesting offers connected to writing put to me, but it often just comes down to the issue of time, and I know which side my bread’s buttered on.

How about reading? Is it always crime fiction?

Not always, but probably most of the time. When I head into a bookshop, it’s the crime section I aim for. The fact I write crime is directly related to it being something I’ve read, in one form or another, since childhood. There are so many great writers, it’s hard to choose favourites, but I don’t miss books by Michael Connelly, George Pelecanos, Graham Hurley and Ray Banks – they’re consistently my favourites. I also love writers like Roddy Doyle and Irvine Welsh, and going back a bit, John Steinbeck. In many ways, I don’t think they’re a million miles away from crime writing. A lot of the elements are the same. I don’t read a lot of non-fiction, but I enjoy good football and music writing.

It’s home...it’s somewhere in-between the two extremes. In many ways, it’s a frustrating place to work as a writer, as the local council don’t seem to value the arts in any meaningful way, and nor does the wider public. Maybe it’s our relatively isolated geographical position, but the city certainly suffers from a general feeling of cynicism and distrust of different ideas. That said, there are some marvellous hidden-gems in Hull, both in terms of writers, musicians and playwrights, as well as some fantastic venues like Hull Truck and Fruit. As a city we don’t seem to be very proud of what we have, so you have to look that bit harder to find the good stuff. But it is there.

Once ‘The Late Greats’ is done, it’ll be on with planning out the next novel. It has a working title, but I’m not ready to share yet in case it’s a load of rubbish! I’m more of a planner than a fly by the seat of my pants type of writer, so I’ve learnt it’s important for me to keep a firm grip, as I’m now into the cycle of writing one novel and promoting another. There’ll be a short story in the ‘Mammoth Book of Best British Crime’ next spring, which sees me sitting alongside writers like Ian Rankin, Christopher Brookmyre and Kate Atkinson, so that’s a massive boost for me. There’s another story scheduled to be included in an American anthology and a couple more will leak out onto the Internet in the not too distant future. Keeping busy!