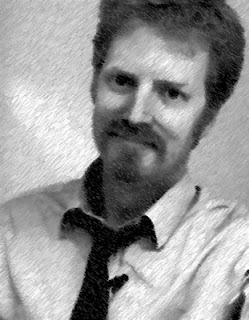 I reckon that Steve Weddle's a gift to all of us. He's out there producing the mighty fine Needle Magazine, is sharing and airing opinions that matter and he's one hell of a writer.

Just look what he does here to the interview framework. If ever there was someone who could turn things upside down and keep you on your toes, he's the man.

And personal thanks from me, Steve, for having me in Needle's summer issue. Being between the same covers as those other writers was a real shot in my writing arm (still is).

Here he is. I reckon he deserves to be titled. Lord Weddle? Add your own to the comments and let's see which suits him best.

Q: You want me to ask you about ebooks and the future of publishing?

Q: OK. How about we talk about books, then? I heard you say the other day that you’d just finished THIS DARK EARTH by John Hornor Jacobs and you said it was some of the best stuff you’ve ever read. Dark and engaging and full of pathos and a plot that just keeps moving and characters you get to know and that you get all sad when they die or get beaten and that if it ever gets on the shelves it’s going to be at the front of every bookstore in the world. You really think it’s that good?

Q: Um, alright. So you have an MFA in poetry? Kinda namby-pamby, ain’t it? I mean, you’re gonna write all your tough guy stuff in rhyme? “He came with a gun/ to kill the man’s son”? That what you’re planning to do?

Q: So how do you go from writing poems to writing crime fiction? You see similarities there? Like how both need a tightness of language, a vividness of detail, of dialog? You think good poems and good fiction have more in common than most people consider? You think a good crime fiction piece has to have a knock-out ending, something that ties it all together like a good poem?

Q: Well, how come you didn’t start up a poetry magazine? Is it because THE LINE-UP is so good that you didn’t think the community needed another one? Is it because you wanted to see crime fiction on paper? Is that what NEEDLE (http://needlemag.com/ ) is all about? Putting great fiction into readers’ hands?

Q: So with NEEDLE, you folks have published Ray Banks, Nolan Knight, John Stickney, Frank Bill, Julie Summerell, Nigel Bird, Sarah Weinman, Allan Leverone, Chris F. Holm, David Cranmer, Stephen Blackmoore, Mike Sheeter, Kieran Shea, Kent Gowran, Eric Beetner, Hilary Davidson, Cormac Brown, Nathan Singer, Chad Rohrbacher, Keith Rawson, Patti Abbott, Dave Zeltserman, Paul D. Brazill, Sandra Seamans, Christopher Grant, Eric Nusbaum, and Jedidiah Ayres. Every one of those writers does amazing work. Bill just got his books bought by FSG and his DONNYBROOK novel will be on shelves next year, I guess. Ray Banks has so many great novels out already, with that Cal Innes guy one of the best characters ever. I mean, DONKEY PUNCH alone puts him in the hall of fame. And Chris Holm with his stories all over and his novel soon, I hope. Cranmer of the Beat to a Pulp website. Sarah Weinman and all she does. And Blackmoore just sold his book, too. And Shea and Sheeter. And Nusbaum getting his writing picked up for BEST SPORTS WRITING. And Davidson’s book coming out in the next month or so. Holy crap. Grant and his site. And all Ayres does. And Knight and Stickney and Bird and Leverone. Those guys have stories at all the best places. And the piece by Summerell. Never read her before, but it’s a great story. Beetner’s book. Wow. Loved it. And Gowran. Didn’t he used to write poems, too? And Cormac Brown’s short works. And Nathan Singer. Man, his novels with Bleak House Books were amazing. And Rohrbacher. Isn’t he another poet? Rawson, too? Man, I love CrimeFactory. And Patti Abbott, some of the best short stories around. And Zeltserman? That dude can write. And Brazill and Seamans? Man, those two are great, too. I mean, wait, what was the question I was asking?

Q: So who is the NEEDLE crew? Word is you don’t really do too much. John Hornor Jacobs listens to all your dumb ideas and tells you which ones aren’t completely stupid. And he’s the one who makes the magazine look as awesome as it does. Not like you do anything with that. And Naomi Johnson reads a hundred stories a week just to keep up with the submissions. And she’s always spot-on in her assessments, offering ideas for improvements and keeping a list of emails you guys have to block. And Dan O’Shea and Scott Parker also reading a bunch and helping proof. And I hear Stephen Blackmoore has even joined up and is working on setting a record for submissions read. What does that leave for you to do? Doesn’t sound like a damn thing.

A: Yeah, pretty much.

Q: That kinda like the DoSomeDamage.com blog? Where you talk Jay Stringer, John McFetridge, Dave White, Russel D. McLean, Scott D. Parker, Joelle Charbonneau, and Bryon Quertermous into doing all the work? All the blogging and heavy lifting?

Q: I hear those DSD folks have some great work, too. McFetridge with his Canadian crime series. Dave White with the Jackson Donne novels. Russel D. McLean with those two P. McNee novels. And Joelle Charbonneau with her debut coming out next month or so. And Stringer and Quertermous and Parker all with books in the works and stories all over? That’s a helluva lot of talent you’ve got making the blog look decent.

Q: I was just looking over your answers, Weddle, and once again you’ve gotten someone else to do all the work. These are the worst answers I’ve ever seen to an interview. You should at least thanks Nigel Bird for the space.