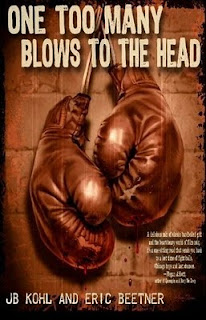 One Too Many Blows To The Head ranks amongst the top titles around. And that cover? Shines out like a gold bar. Here's Eric Beetner.

Be inspired. Be very inspired:

1. Were you born in the right era?
Not by about 50 years. I’m not one of those people who thinks they should have been around during Jane Austen times but I know it’s not any less silly to wish like hell I’d been around for the golden age of Hollywood and the birth of crime fiction as we know it today. If I’d have been around in the 1940s I could live in the same house I’m in now which at the time was about a half mile away from Hal Roach studios and the David Selznick lot and about 3/4 of a mile from MGM.
I could be writing for movies right as they were getting all Noir and telling the kind of stories I like to tell and then I could write for the pulps and knock out short fiction on the old Underwood. Only trouble is I don’t smoke and I don’t drink and I don’t care for hats. I guess I’d have to adapt.

2. How do you do all the things you do and why aren’t you rich yet?
I have a full time job as a TV editor and producer. I have written TV scripts (only a few and all bad) and feature screenplays (quite a few and some very good but none that made it into production). I have written and directed my own film which even won awards, I have been a musician and released two real albums and three other self-released albums. I have sold paintings of mine and now I have a novel out, another on the way, three more in the can and enough short stories out there to choke a pig.
I am the quintessential jack of all trades, master of none. But damn it feels good to make a life and a living, such as it is, out of being creative. College counsellors and ex-hippie parents always give the advice of, “Do what you love and then figure out a way to get paid for it.” I actually have. Not a bad gig.

3. How is writing with a co-author different from solo writing?
My novel One Too Many Blows To The Head and the upcoming sequel Borrowed Trouble were co-written with author JB Kohl. The fascinating thing is that she and I live on opposite coasts and have never met in person. Never even spoken on the phone.
We have devised a way of working that really isn’t much different than writing solo. We write on our own, send chapters across the wires and then give minor notes. We outline back and forth until we like the result and then just set in and write it. Things change, we adapt. It’s been an absolute pleasure and a great learning experience. And I’ve said this before but the best part is that you get to both write a novel and read it at the same time because her half comes in and I know the basics but I’m always surprised and compelled by what she has come up with. I love it and I hope we can keep doing it for a long time.
I’m also very focused on my solo writing, which she is as well. If I can start to get those novels published and have the best of both worlds it would be a dream come true.


4. How do you not get discouraged?
I get discouraged every damn day. I get very down on my own skills or lack thereof. After all I’ve attempted in my life I am completely used to failure or worse, indifference.
If you have no patience for rejection, alienation, frustration, ego crushing bouts of self-doubt and depression then you should not try to be a writer. If you keep writing despite this and the fact that you will more than likely never make a dime at it, you not only should be a writer – you already are.


5. Why does everyone think writing a novel is so hard?
I have no idea. Working in Hollywood I am surrounded by a million waiters and valet guys with a screenplay in their pocket or, worse yet, an idea that they are “working on.” Most novels never make it from concept to completion and it is those novels that get talked about the most by their “authors”. You want to write a book? Write it. Don’t tell me you’re going to write it. Don’t tell me you have an outline. Don’t tell me you have an idea. Write the damn book. Then write another one. If no one cares, write another one. If that one sucks, write another.
When I was writing my first novel (which isn’t all that good and sits on my hard drive alone and gathering digital cobwebs) I didn’t tell anyone. What if I never finished? I didn’t want to be that guy. The guys who is writing a novel like it’s all important. The guy who talks about it but never finishes anything. When I finished I confirmed I was not that guy. I still didn’t tell many people though. Only now that I have a book out there in the world do I even mention it to anyone. I still hesitate to call myself a writer. A writer has a bodd of work. Talk to me in five years.
So, in short, writing a novel takes time and discipline but it’s not hard. Brain surgery is hard. Rocket science is hard. Doing 25 to life in prison is hard. If writing is hard, you’re not doing it right.


6. Tell some stories about the back biting and jealousy in the writing community.
Wish I could but the truth is everyone I’ve met is so welcoming, so kind, so encouraging that it kind of freaks me out. Authors, and crime authors in particular, should be misanthropic, anti-social misfits, and they are, but they’re also the nicest bunch of people I’ve ever met. Again, coming from a Hollywood screenwriting background I was used to my colleagues outwardly wishing for my failure because every script of mine that advanced meant one of theirs languished. It was miserable. I expected the same of publishing because there is only so much space on the shelf for books. I assumed it would be one big scrum of flying elbows and spit in the eye as people jockeyed for readers attention. Was I ever wrong.
I’m small potatoes on a small publisher and I have had long conversations with writers I really admire, writers I read, and they instantly treated me as an equal. It still shocks me every time I am exposed to it and I hope it always does.

7. Why don’t you write a series and get rich that way?
I should. Readers seem to love a series. Publishers sure do. I have just never been a series guy. It’s such a commitment. And I’m always late to the party. Who has time to catch up? And do they ever stay consistently great? Not that there aren’t some great books. I’ve been reading more lately just because they are books by people I know and admire. I’m thinking of Rebecca Cantrell’s Hannah Vogel series. But I caught that from the start. Same with Kelli Stanley’s Miranda Corbie books and Stephen Jay Schwartz Hayden Glass books. I will almost always reach for a standalone though. Marcus Sakey, Victor Gischler, Duane Sweirczynski. I love Joe R. Lansdale but haven’t read all the Hap and Leonard books. I love Steve Brewer but haven’t read the Bubba Mabry books (yet, I just got all 7 from Steve himself so now I’m committed).
I read my first Ross MacDonald not too long ago. It was silly that I’d never read him. I loved it. Will I go back and read all of them? Doubt it.
So, at the risk of being a hypocrite since I just finished a sequel to One Too Many Blows To The Head, I find stand-alones more fun to read and write. Anything can happen. Anyone can get killed off. I’m always trying to think of a series character but my brain just doesn’t work that way. Stupid brain.

8. Do you follow the old adage ‘write what you know’?
Dumbest writing advice ever. Sure use what’s at your disposal, but if all I wrote was what I know I’d have fewer readers than I do now and, even more tragic, I’d bore myself silly as I wrote. I read to be transported. I write for the same reason.
I say write what you want to know about. Even if that is as simple as, “I want to know what happens at the end of this story.” If it’s enough to compel you to write your way to the end, it will be compelling enough for a reader to get there in 1/10th the time.


9. What about the new stuff?
As I mentioned JB Kohl and I have completed the sequel to One Too Many Blows To The Head. It is called Borrowed Trouble. It takes place in 1941 Hollywood at the dawn of the porn industry. That’s simplifying it too much but there are some blue movies, a missing girl, some really bad men and two former enemies joining forces to solve the case.
I have some of my solo work out to agents now and I have my fingers crossed for that. I really like the solo books so I hope they get a chance to see the light of day eventually. Until the stigma of self-publishing goes away I’ll sit on them until I can find someone who wants to put them out, big or small it doesn’t matter. I still rely on a publisher to weed out the crap from the worthy. I read enough stuff on big imprints that I think is crap so I shudder to think what is still in the slush pile. I trust most publishers to tell me if my stuff is unworthy of publishing too. Better for you if it stays locked up.


What’s your goal in publishing?

Just to be a part of the conversation. I don’t thrive on praise, just inclusion. I don’t have to sell a ton of books, I have a day job I love, but just to be on the shelves with authors I love is so amazing. To be able to throw my hat in the ring and not get laughed out of town is pretty damn cool. Having just one reader who is not a family member or friend is enough to keep me writing on to the next thing.

Bio:
Eric Beetner is the co-author of One Too Many Blows To The Head, a noir novel set amid the crooked boxing word of 1939 Kansas City. He has written dozens of short stories that hide out in various webzines across the internet. His story Ditch (published in Thuglit) was chosen third place in the Storysouth Million Writers awards for best short of 2009 and he recently took the top spot in Jason Duke's Red Hot Writing challenge. Be prepared because he's going to be around for a while.

for 'My Asshole Brother' (winner of Jason Duke's competition) look out for Issue 6 of Crime Factory:

and to buy ONE TOO MANY BLOWS TO THE HEAD:

or on UK kindle: