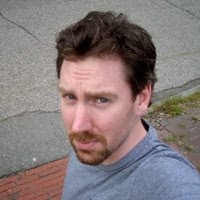 Here's a guy that's oozing talent. I'm proud to say that I'm in the same issue of Needle as he is. If you haven't been Needled yet, go and give it a try ( http://needlemag.wordpress.com/ ). Sure, it's addictive, but it's cleaner and cheaper than smoking (unless you intend feeding it into a hookah and setting alight).

What follows is a fine example of skill - two sides of one brain that have completely different characters (now how the hell did he pull that off?).

Dancing With Myself: CHRIS F. HOLM

For those who may not be familiar with you and your work, could you describe yourself in three adjectives, a preposition, and a noun?

Well, what do you expect – you didn’t even allow me any verbs! I’m not at all convinced you know what you’re doing.

Nor I you. To be frank, I’ve read a fair bit of your work in preparation for this interview, and I must say, I didn’t care for it. It’s quite violent. For someone whose writing often takes place in small towns, you’ve nary a sleuthing feline or nosy philatelist to be found. Instead you seem to favor nasty, small-minded people doing terrible things to one another. Why is that? Why do you suppose you have a predilection for such unsavory subject matter?

I wouldn’t say I have a predilection for it – quite the opposite, in fact. I think my writing reflects my own worst fears, about myself and the world both. Oftentimes what I write is darker than what I’m comfortable reading.

That said, I think you may have – unintentionally, I’m sure – hit on one of the themes I’m interested in exploring in my work. Now, I’m not one to beat up on cozies or those who write them; light mysteries are no less vital to the genre than is the bleakest noir. But having grown up in the decaying backwaters of upstate New York, I learned a long time ago that not all small-town crimes are cozy. Small towns are rife with violence, drugs, abuse, and murder – more so, per capita, than are cities. And because small towns are often insular communities, those crimes have a habit of taking on a generational aspect. One youthful transgression can mark a family for decades, and cycles of abuse unchecked mean aggressors were often once victims themselves. Yet crime fiction, like America itself, too often clings to the pervasive myth of “small-town values” – a lovely falsehood, as far as it goes, but no less false for it.

But not all your stories mine this vein, correct?

No, not at all! In fact, my short story “Action”, which appeared in the May issue of Alfred Hitchcock’s Mystery Magazine, was a comedic caper intended as an homage to the late, great Donald Westlake. And I recently collaborated with David Cranmer, editor of Beat to a Pulp, on a time-travel adventure serial called “A Rip Through Time.” Neither of those are all that dark, and truth be told, I think they’re two of the best stories I’ve ever written.

Actually, I was referring to your Elizabethan frottage confessionals, written pseudonymously as Lady Nigella Winterbottom.

You bastard – you said you wouldn’t bring those up!

[At this point the interviewee kicks over the table, spewing profanities, and is only mollified by the promise of a Zagnut bar.]

Ahem. Where were we? Ah, yes. Given your somewhat inexplicable success in the realm of short fiction, have you considered one day trying your hand at writing a novel?

I thought you said you researched for this interview!

I did! I mean, I tried. But there was a Twin Peaks marathon on cable…

Ah. I see. Well, actually, I’ve already written two novels, both of which are currently out on submission. One, THE ANGELS’ SHARE, is about a young girl who’s murdered in a small town on the coast of Maine on the eve of a contentious local election. The other is a fantasy/noir crossover called DEAD HARVEST, which recasts the battle between heaven and hell as a Golden Era crime pulp.

Actually, that doesn’t sound half bad.

Don’t let it go to your head. Anyways, I believe that concludes our interview –

Wait – I thought I got ten questions!

Was it ten? That seems like kind of a lot for a guy nobody’s heard of.

Yeah, I thought so, too, but that’s what Nigel said.

Oh, fine – I’ll give you one more. [A riffling of papers.] What did the others ask? Something this dolt will be able to answer…and preferably nothing actually about him. Oh! Perfect! Whose short fiction do you most admire?

All time? I think Tim Powers writes short fiction richer and more textured than most novels. And Chandler’s Black Mask output has never, in my opinion, been topped.
As far as folks making the scene today, I think Hilary Davidson is a master of short fiction; really – it’s obnoxious. Patrick Shawn Bagley’s another favorite of mine; he’s been quiet of late, but maybe this will serve as a kick in the ass for him to get something new out there. Nobody, but nobody, writes rural noir like Patrick. Stephen Blackmoore’s been on a tear these past few years. And just the other day, I read a fantastic little punk-rock tale called “Beat on the Brat” by one Mr. Nigel Bird.