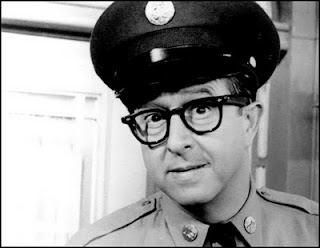 This week has been something of a Bilko week for me.

In case you haven't seen the Bilko episode in question, gambler and sharp Ernie Bilko has a run of astonishing luck for a day. Unfortunately he only realises a matter of minutes before midnight that everything he has done has gone his way. He decides to put on a bet in a race on the other side of the world (as I might falsely remember) and the horse is fantastic. It runs out of its skin until midnight. As the second hand crosses the 12, Bilko's day comes to an end; so does the energy of his horse. Needless to say he doesn't win and the day finishes as so many others have done.

My week's been similar in many respects. If it weren't for the fact that I chose to give up gambling after a few visits to Gamblers' Anonymous (bless them for what they do), I'd go out now and bet on whatever I could. There are four hours of my lucky week left and I might not ever have to work again.

Problem is, I can't do that to myself. That was the problem. Once I'd discovered that you could bet on practically anything (even tried synchronised swimming once) at any time now the world is connected by computers, I was sunk.

It doesn't matter. My week has been immense.

I guess it started when I bought my daughter a raffle ticket at a 'Surfers Against Sewage' fundraiser. The ticket was drawn, the prize was a tee-shirt of adult size and I now have something cool and current in my wardrobe.

It didn't stop there.

On Monday I was contacted by Maxim Jakubowski. That was a buzz in itself. Even better, he wanted to include my story 'An Arm And A Leg' in the next 'Best British Crime Stories' anthology. There wasn't anything to think about. It's a dream come true.

You can find a copy of the previous collection at:

When you see the names on the cover you might realise why I nearly fell off my chair when I got the message. Thanks Maxim.

I'd also like to thank Jen, Jon and Ruth Jordan over at Crimespree. If they hadn't picked the story up in the first place, it would probably still be little more than a file on my computer. Check them out at:

Monday evening I had a nice bit of news too. A short piece of mine was posted by 'Dark Valentine'. It's a very short piece written from the point of view of a peacock. I had fun writing it and it's lovely to see it up. 'Valentine' are going to be big, I reckon, so watch them grow. Check out the story at:
http://darkvalentine.net/index.php/2010/07/another-point-of-view/

The next lovely thing? I think it was a book through the post.

I had a story accepted by 'Dark Static'. I first found out about there submissions call from Paul Brazill. He works tirelessly as a writer, but also as a writer's writer, by which I mean he's always posting useful information in a very unselfish way. He's got a link here under Brazill. Go pay him a visit - he lives in Poland, might well need a bit of company every now and then.

You can find a copy of 'Caught By Darkness' over at:

Its cover, by the way, is really striking.

Later on in the week news arrived the Crimefactory had once again posted an issue. You'd think that from the speed of turn around that the quality would suffer. No way.

I'd just finished the previous one that goes out with a fantastic bang, Naomi Johnson pulling out all the stops. Her last lines are brilliant. Go look for yourself.

The list of writers in Crimefactory 4 could blow you away as powefully as any shotgun, I reckon.
Standing out for me were the names of Allan Guthrie and Scott Wolven.

The Guthrie is the opening of his next book 'Blood Will Out'. If the first chapter is anything to go by it's going to be an object lesson to us all in how to write a crime novel. It's fast and you can feel it accerating away from you from the beginning. Brilliant, but then what else would you expect from Mr G? Can't wait.

There were also a couple of Al's covers on show earlier this week. They're for online versions of a couple of his shorter pieces.

Just when I was thinking things couldn't get better, another email arrived.

This one was from Christopher over at A Twist Of Noir.

Some sites I really want to be part of. ATON is one of them. New stories appear on a practically daily basis. The quality of the ones I've read (and I must confess to being a beginner here) is superb. And it's all available to you for free - imagine. I've even read pieces there that were written way back when the hard-boiled thing was just kicking out with legs covered in puppy fat.

If you make it that far, I urge to to take a look around. I promise you'll like what you see.

I won't be able to repeat a week like that again, I'm sure, but I'll be trying. Thing is, I'm settling back to the novel so there won't be time for the distraction of short pieces for a while (or at least that's was the plan until something my eldest said to me today got me thiking).

Still, I've got Needle to look forward to and later on Dark Valentine. Can't be bad.

My reading this week has been the bollix. Ken Bruen has had me royally entertained.

'Once Were Cops' is a fast paced read with a group of dark characters and their inner voices. Thing is, though the main voice is from a twisted egomaniac, there's something about him I couldn't help liking - an openess and sense of humour I suppose. And I wasn't even expecting the twist, let alone trying to work it out.

The other, a collaboration piece with Jason Starr, 'The M.A.X' follows a number of self-deluded individuals as their lives mingle and overlap. There's Angela, hard nosed criminal looking for the easy life that's always eluded her, conman Sebby and the M.A.X of the title who, through a series of misunderstandings, ends up being the daddy of the prison he's in when he should be the plankton. It's highly engaging, hard and hillarious.

As I said, it's been one hell of a week. I know I should go and buy a lottery ticket, but hey, rules is rules.

Instead I'm going to settle down for the second episode of Sherlock Holmes. Fab.