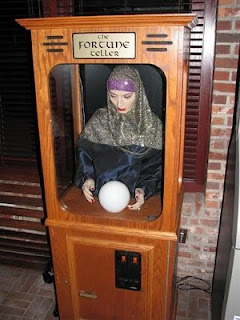 “Hell we going to do with fifty cents?”

Estragon didn’t answer, just rolled the coin between his fingers and stared at the machine.

Estragon had been practicing for years. Could vanish things before your eyes.

On the boat across he’d fleeced them all. Took money from them like they were bank tellers.

Things had been different when they hit the city. Those boys had eyes like hawks.

“Split a bagel?” They hadn’t eaten since the day before.

“Put it in the machine.”

“Fifty cents to our name, we don’t got no future.”

Vladimir rested his forehead on the glass. Let the bruises cool.

Medium Sibille seemed to be urging him on. One wax hand hovered over a crystal ball, the other held the Ace of Hearts. It was his lucky card.

Vladimir removed his hand and there was nothing.

Estragon took of his hat, slapped his brother across the face and walked away.

Godot, watching the whole thing, felt the coin materialise in his hand.

He stepped over his begging cup and headed for Sibille.

As the coin dropped, the fortune-teller’s eyes flashed and he nodded his head.

Three hard bangs and Godot almost jumped out of his skin.

Pulled out three jewels big as his fists.

Squirreled two away in his pockets.

Threw the third to Vladimir and limped towards the morning mist.
Posted by Nigel Bird at 23:27