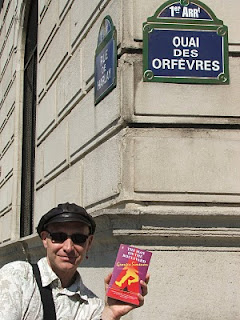 I've just returned from a couple of weeks in France, of which the first was spent in Paris.
It was a marvellous time in a beautiful place and, funnily enough (after many visits there), was the first in which a had a partner to share it with (most other trips have found me watching silently in hope that one of the many amazinlgly attractive women would just come and fall in love with me - it never happened).
I packed a couple of Maigrets in my bag (I'd chopped them up and managed to get them through customs without them noticing the smell emanating from the bodies).
For me, Simenon is the perfect read for the Metro, for cafe tables and hotel rooms there. You get a flavour for the city that helps to sharpen all the images.
It also helps to give an impression of a time gone by - pre and post World War 2, where heat is generated by stoves and light by lamps.

I used it sometimes as a tour-guide for route planning. At one point during my reading, Maigret described a waffle stall as the best and largest in the city. Needless to say I went to track it down and, needless to say, it had gone (if it had ever existed) seventy years from the time of writing.

Reang Maigret makes you hungry and crave a spot of alcohol too. He's not the hard-drinking private-eye type, nor the lost soul, but he does like to take lunch and an odd glass over dinner. Brasseries, restaurants and bars feature heavily in his life and the lives of those he investigates. If only I still drank booze I'd have downed more than the odd bottle of red or tumbler of Ricard.


Course, you don't have to be in Paris to appreciate his work.


He brings the place to life wherever you are, like any good writer would.


I read 'The Bar On The Seine' (written 1932 when Maigret was a lowly Inspector) and 'The Man On The Boulevard' (from 1953 when he's Chief Superintendent).

There's are intersting contrasts in Maigret in his roles on the force. As Chief Super he spends much of his time wanting to get out on the street rather than to have to rely on his staff (a lovely, loyal bunch of talented cops).

Even so, he's still the same man. He gets under the skin of those he's checking out, hangs round in their haunts, sometimes even hangs out with them (Columbo style). He blends into the background easily whether he's dealing with the rich or the homeless, observes minute detail wherever he is, knows the norm inside out so that he can spot a hint of the unusual from a mile away, reads people like newspapers, plays them like puppets.


Beneath it all, there's a strong sense of humanity - a love of people and of life. He often befriends the perpetrators of crimes, respects and likes them in a way that is unusual. He'd prefer the company of a murderer with a sense of being genuine to any hypocrite with less to hide, any day.


Simenon wrote books other than Maigret, too. In fact, for the crime-reader, these might be the place to begin. There's a different feel to those novels. More darkness, certainly, more angst, blends of Dostoevsky and buds of existentialism perhaps. Strongly European with an aftertaste of the harder boiled Americans.

I'd write more detail about the stories themselves, only I don't need to. That's been done many times. You might get hold of a copy of Crimespree, Issue 34. Yes, I'm in it, but that's not the reason. 'Hey! It's Ayo Onatade' has 4 pages in there with lots of detail that you might find informative and I'd definitely recommend the piece to you.

The picture at the head of the page has me sightseeing. I'm outside the Quai Des Orfevres, Maigret's base, the office in which he'd handed out enough rope for many to hang themselves.

It was hot when we were there. We settled down in a shaded square, the type perfect for a game of boules, and watched as a film crew went about their business. We were allowed to stay in the background as long as we didn't watch the camera. Wonder what that was all about.

And if you go along to the Quai, too, just behind it you'll find a cathedral worth checking out (if you've got time) - Notre Dame I think it's called.

I've just cleared my bookshelves at home. The books no longer stand two deep. I revealed my old second-hand (each and every one) Simenon Collection, including his biography. I didn't realise I had so many. Most of them are in the green penguin crime series. I even found my only hard-back. I bought 'Sept Petites Croix Dans Un Carnet' on a hitch-hiking tour over twenty-five years ago. The idea was that I'd translate it and improve my French. Proof enough that I didn't were my poor efforts at communication this time round - I can still only read the title and not the first sentence.

Going back to Maigret for me was like meeting up with an old friend. If you don't already know him, I highly recommend you make his acqaintance, meet him in some bar you've never been to before, buy him a Pernod and a coffee.

Georges Simenon, prolific writer and lover. Thanks.
Posted by Nigel Bird at 10:09