One Man's Opinion: THE KILLER IS DYING by JAMES SALLIS 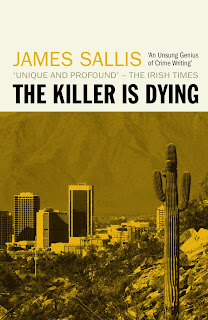 ‘Towards the end, back when he still lived at home, his father, well along in years (fifty-plus when he was born), would spend afternoons stalking about the front yard, staring at what was left of the city’s curb, at remnants of paint on the side of the house, at abandoned birds' nests and tree trunks. He had always believed the old man to be thinking. About how his life had gone, maybe, or the meaning of it all. Slowly he came to understand that the old man wasn’t thinking at all, he was searching - looking aimlessly about, with a dull but persistent hope, for something he’d never had.’

The Killer Is Dying (US). The cops are dying. Everyone is dying. That’s something we all have to come to terms with at some point in our lives.

It took me an age to read this one even though it’s not a long book. I started it just before the Olympic Games which, when they began, quickly absorbed much of my attention and spare time. It wasn’t just my preoccupation with sport that slowed my reading, however. That’s also down to the fact that there isn’t a clear and driving narrative to the story and also because each chapter is dense and powerful and requires a good deal of focus.

The killer is on a job that goes unexpectedly wrong. As we get to know him, we loop back through his life to find his history is colourful and interesting and that he also has a wonderfully philosophical view of the world. He’s also a very particular kind of hit man and an extremely successful one. Hits are set up on the dark web and are advertised as doll sales. They’re carried out clinically and yet with a form of compassion at the same time.

He’s been chased down by a couple of cops who are also surrounded by death. It’s their business. They’ve seen a lot and each case has had an impact of sorts. The cop we get to know well is Sayles. What’s interesting in this novel is the sense I had that the differences between hunter and prey are minimal. They’re human and therefore share setbacks and suffering on a regular basis. What they have in common is bigger than what they do.

The third strand comes in the form of a youngster who is forced to bring himself up when his parents leave. He makes his living selling interesting items and passes the time by surfing obscure corners of the internet and by reading stories to old folk experiencing their final months down at the local care home. He also happens to be confused by a procession of dreams which come from the killer’s consciousness.

As these parts converge and are woven together, they become so tight that it becomes difficult to distinguish one from another. They share a consciousness or a way of being of sorts. They’re all reflective and tied to their memories as well as being able to see wonder in small things around them.

In the end, I was won over by the author. I can’t really explain why I liked it so much, but can tell you that I loved being in the company of these characters as their lives unfolded before me. It was refreshing to be taken on meandering journeys, random tangents and through regular lists of simple things. There’s just enough in the police investigation to keep the pace moving in a forwards direction. Each page has something outstanding to appreciate whether that’s a nailed phrase, a moment of poetry, a meditation, a philosophical musing or just a swift kick out at complacency.

The Killer Is Dying is light yet meaty. Mundane yet exciting. Beautiful yet horrifying. Oh how I love a contradiction.
Posted by Nigel Bird at 12:10