One Man's Opinion: ALL THE PRETTY GIRLS by JT ELLISON 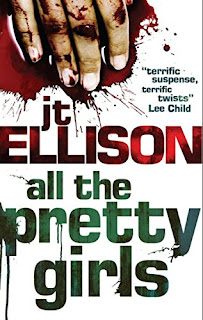 All The Pretty Girls (US) is a well put together police procedural that maintains a keen interest from the beginning.

The book opens right in the action as we join a serial killer enjoying a moment of murder. It’s great to get into the mind of the perpetrator straight away and the sinister mood haunts the rest of the tale as the book progresses.

Taylor Jackson is charged with leading the police investigation. There’s a sense of building urgency to her work as the killer becomes increasingly active.  The banter between officers works really well and keeps up the momentum of the story, as does the involvement of Jackson’s secret partner, FBI profiler John Baldwin when he is brought in to unpick the case.

As well as the police investigation, an ambitious TV reporter has been selected by the killer as a point of contact. Though she’s unsure why she’s been chosen, she begins to see it as a lead that might take her from local success to national star. It’s a lead that she can’t resist. As she is drawn further into the killer’s world and begins to put things together, she begins to see that the situation is closer to home than she could ever have imagined and she is forced into a position that none could envy.

The killer continues to make appearances throughout and I enjoyed these insights into his world. His mind is twisted and his methodology is to take the hand of one victim and leave it with the body of the next. These moments offer a contrasting darkness to the energy of the other strands of the plot.

As things approach their conclusion, the action comes thick and fast. There are pleasing twists and turns all off which lead to a satisfying conclusion.

I enjoyed my read. The pacing and the strands are handled with skill. Things do rely on a number of coincidences and unlikely connections, but the key elements are enough to brush these issues firmly to the side. This one was perfect for summer holiday distraction and will lead me to more of the author’s work and to more Taylor Jackson in the future.
Posted by Nigel Bird at 12:32