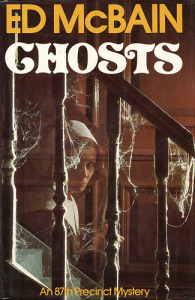 I’m a big fan of Ed McBain’s  87th Precinct novels and the truth is that the more of them I read, the bigger the fan I become. The central characters are brilliant conceptions, the plots are strong, the tangents and the humour always a treat and the police teams always manage to overcome the chaos of their departments and of the city in which they serve.

Ghosts (US) has just become my favourite of the bunch I’ve tackled. That could be because of the growing warmth I feel for the detectives, but I think there’s more to it than that.

It’s Christmas and Chanukah all wrapped up in one. Carella and Meyer Meyer take on the case of a couple of murders in a swanky apartment in a wealthy part of town. One of the victims is the writer of a successful ghost book. He’s survived by his wife Hillary who claims to be a medium, has a twin sister and happens to be the spitting image of Carella’s wife Teddy. As the case continues, there are more murders to contend with. There’s also a heavy snow that’s making life difficult for everyone and which is creating openings for Carella as he is forced to spend time apart from his family. The net of the investigation tightens and is complicated by the contributions of Hillary who is determined to use her powers to get to the bottom of what is going on. The weaving together of these two strands leads to a superb and rather unusual ending.

In Ghosts, the process of tracking down the criminals is as strong as ever. What I very much enjoyed about this one was its sexy edges and undercurrents. The book also flirts with the supernatural and rather than detract from the tensions of the tale it really does enhance the drama and the flavour of the piece.
Posted by Nigel Bird at 15:55