One Man's Opinion: HEART OF DARKNESS by JOSEPH CONRAD 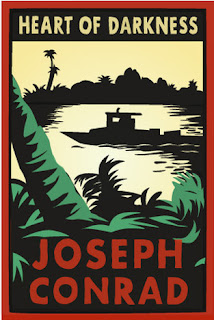 ‘One can’t live with one’s finger everlastingly on one’s pulse.’

Marlow recalls an adventure to his shipmates on the Thames. Like any recollection, the story is offered through the filters of memory and experiences and is prone to the exaggeration of detail and key elements. This allows for a richness of description of people and place as well as for the cranking up of tension throughout.

Marlow falls into a job of captaining a steamer on its journey along the Congo to meet up with a renegade ivory trader called Kurtz. Kurtz is the one-time darling of the company, but his success and obsession seems to have gone awry and the respect that he was once held in has festered into the fear and contempt of those he works for.

As the story progresses, a sense of impending horror builds. Each of Marlow’s encounters offers foreboding. The chances of surviving the heat and conditions seem slim. The pictures that are painted of Kurtz offer contradictions, but unify in the danger they emit. As the time comes for the steamer to arrive at Kurtz’s camp, I felt and genuine panic and curiosity about what was about to follow. For me, this engagement is brought about because of the device of the story-teller addressing the audience directly. It’s also heightened by superb detail where all is viewed through whatever the opposite of rose-tinted spectacles might be.

The bulk of Heart Of Darkness (US) is beautifully put together. The power of the unseen and threatened is immense. If there’s an issue for me, then it’s that the journey is so much more than the arrival. Kurtz, such a giant throughout, is something of a shadow of himself by the time we meet. That which is unseen shrinks as the curtain is pulled back. This is clearly intentional and it’s more than likely that I’m missing the point, but the sense of anti-climax I experienced has been difficult to shrug off. Maybe the issue was that I was expecting Brando to make an entrance and it felt more like they’d sent on an understudy who had never really acted before.

I thoroughly enjoyed much of this one. The unpeeling of humanity down to raw flesh is brutal. The levelling of civilisation to an animal common denominator is unsettling. The conflict between the futility of life and the need to fully suck out all of its juices battles to leave a sludge that’s as dark as the title suggests. The voice of the storyteller is perfect and the images conjured are vivid throughout. The destination may not have been the one I wanted to reach, but I’m delighted that I finally went along for the ride.