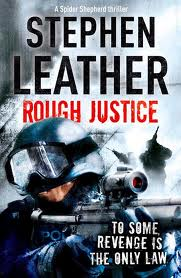 Rough Justice is a brilliant read. It offers the entertainment and distraction that I like to find in a thriller, but it also had me thinking about a number of issues and really stretched my opinions until they were out of shape.

The subject under investigation is justice itself and the book demonstrates just how complex and thorny a topic it is. Mr Leather pushes the boundaries with the clever juxtaposition of the various strands of the plot. In each of these elements there is a need for justice and in none of them is the outcome either straightforward or the same.

Shepherd is working undercover as a member of an elite police unit. He’s mixing with hard people who have strong beliefs. The investigation is aimed at uncovering a gang of law-enforcers who have decided to take the law into their own hands. We get to follow the gang as they mop up the streets and take serious villains from the streets. Their methods are unorthodox these days, but could be viewed as ‘an-eye-for-an-eye’. Rather importantly, they seem to be succeeding where the law appears to fail time and time again. They’re brutal, efficient and it’s difficult not to feel sympathy with what they’re aiming to achieve – difficult for Shepherd and difficult for me as a reader. To add to the elements here, the issues of racism are raised at a number of levels and examined in ways that aren’t easily or frequently aired.

Added to this, Shepherd finds himself in a position of assisting the Major as he seeks closure for himself and his brother after a number of off-duty soldiers are gunned down by Irish terrorists.

Further fuel is thrown onto the fire when Shepherd’s son is found with a clip of a beating on his phone; because Shepherd reports this to the school, a chain of events is set into motion that leave his home and family at risk. It needs to be dealt with, but the police seem powerless to take it on. Worse still, it’s not long before Shepherd is made to feel like he’s the villain of the piece by one particularly PC PC. Said PC talks sense and brings a liberal mind to the tale, but somehow manages to come out rather badly in doing so.
The development of each aspect is taken at the perfect pace. They link together and bounce off each other perfectly to make the whole even greater than the sum of its parts.

I particularly enjoyed the characters. They come across as very real people in very difficult situations and are presented in ways that blur black and white throughout. Stephen Leather does a fantastic job of zooming in and out in order to build a level of sympathy with the majority of the people who inhabit the book and manages to do this without ever giving the sense that he’s out there pulling the strings and manipulating events, something that I found rather impressive.

At the time of reading, the verdict on the Mark Duggan police shooting came through. The conclusion of the courts clearly doesn’t satisfy everyone, nor could it possibly. What the coverage of the story has shown is how powerful the police are and what amazingly difficult situations they have to cope with. Having grown up with some of the old-fashioned policing that is oft referred to in crime novels of late, I’ve rarely been a police sympathiser, but I think this book came close to helping me understand something of the impact the power of being a police officer must have and it was interesting to take a look at the world from such a different point of view.

I also read this immediately after Ian Rankin’s ‘Saints Of The Shadow Bible’, a novel which also deals with issues of justice and police stretching it to try and make it work. The books are both great, very different and complement each other really well.

For Rough Justice, the 5 stars were never in doubt. Any fewer and it would have been a crime.
Posted by Nigel Bird at 22:50