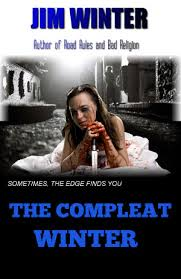 SO WHAT IS THE COMPLEAT WINTER?

The Compleat Kepler is a collection of all my short stories that are not Nick Kepler.

DOES THIS MEAN THE END OF NICK?

Not yet. Nick’s not quite done. But there’s more to crime than just a PI skulking about looking in people’s windows.

AND GETTING LAID MORE THAN MOST PEOPLE.
Well, Nick is generally not wanting for company, but that company usually gets him into trouble. These stories are about people finding more creative ways to get into trouble.

Well, we have a band manager stick his hand in the band’s collective cookie jar, not really catching on the guitar player and the drummer not only hunt, but they know a good place to bury the body.
We have a good cop make a righteous kill, only it’s the son of a sitting mayor.
We have a chronic loser getting ambitious when he sees an armored car.
WHICH ONES ARE YOUR FAVORITES?
I’m particularly fond of “And on the Seventh Day…” That one came about one morning when a street corner preacher called me out for carrying Ken Bruen’s American Skin instead of The Bible. It’s a nice piece of revenge fic. Then there’s “Frank, Jr.,” which came from a challenge by Patty Abbott. I took her literally and wrote about Frank Sinatra, Jr.’s kidnapping from the point of view of the two accomplices.
YOU RIFF ON EDGAR ALLEN POE, TOO.
Yeah, someone challenged me to rewrite a classic short story from another point of view. I picked Poe’s “The Confessor.” The premise was a story in and of itself: Who the hell is Montressor talking to?
IS THERE ANYMORE KEPLER TO BE HAD?
There’s one out making rounds now.
WHAT ELSE IS IN THE CAN?
I spent last spring rewriting Holland Bay, which is best described as 87th Precinct meets The Wire with a female Carella/McNulty. (Actually, I think she’s more like Bunk in the Carella role, but we’ll see.)
YOU HINT THAT YOU’RE WRITING SOMETHING ELSE UNDER A DIFFERENT NAME. ANY HINTS?
The truth will come out when it comes out.
Posted by Nigel Bird at 18:05