One Man's Opinion: SAINTS OF THE SHADOW BIBLE by IAN RANKIN 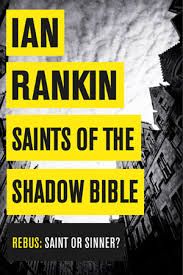 The latest Rebus novel is a real treat. The tagline on the cover reads ‘Saint or Sinner?’ and we all know there’s no easy answer to that one. It’s his duality that makes the man such an interesting character. It’s that duality that allows us to excuse some of our own extremes.


For a law-enforcer who began his career in a very different climate than we have today, the contradictions of Rebus are marked. He’s to live with the things he sees and understands about human nature and, at the same time, play it by the book and remain squeaky clean. It’s no wonder he’s the maverick he is. I tend to picture him in the style of a star in a noir movie, half his face in bright light, the other in complete darkness. Part Jeckyll, part Hyde, one copper.


This book works really well in terms of exploring aspects of a murky past while at the same time focusing on a current set of interlinking investigations. It’s also wrapped up perfectly with a prologue and epilogue that close the circle beautifully and allow for a highly satisfying conclusion to the novel.


The ingredients are all quality. There’s an investigation into Rebus and his days as a Saint Of the Shadow Bible, where policing methods were rough and tough and sometimes created victims of their own; there’s Siobhan Clarke heading up a murder investigation in relation to the death of a criminal linked to the Shadow Bible members and using some of what she learned from Rebus to do a very fine job; Malcolm Fox from Complaints; a new pathologist and some rather old ones; the conflicting politics of the Yes/No campaigns for Scottish independence; the same old internal wranglings of senior officers over the right to the limelight; a couple of leaders of the underworld; a mummified body; scrap-yard; an ex-lover; an old case of a missing woman; and a few pubs.


The pots are kept simmering wonderfully by Ian Rankin and when he finally allows it them come to the boil, the resulting feast is a treat.


If you’re a Rebus fan, you should be there. If you’re not, but you like your detective novels written with skill and style, why not give this a go? A pound to a penny says you’ll be back.
Posted by Nigel Bird at 09:35