One Man's Opinion: THE THIRD MAN by GRAHAM GREENE 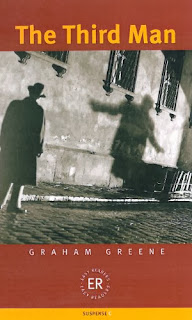 It’s difficult to read The Third Man without being constantly overpowered by images from the film, or at least that was the way I found it. The good thing about that is the quality of images the movie offers.

Of course, the writing conjures up images of its own. My favourites here, the crazy workings of a sliced up Vienna and the inside of Harry Lime’s girlfriend’s flat.

Rollo Martins, pulp writer, turns up to meet his old friend Harry only to find he’s been killed in a car accident. Martins brushes against the police who have been after Lime for a while because of his racketeering and his slippery ways. To defend his friend and to put together some of the incongruities of the puzzle, Martins sets about his own investigation. While he forages for information, he finds that there was a third man at the scene of the accident who didn’t seem to have been part of the witness statements in court.

Martins is a really wonderful character. He’s flawed and loyal and can’t help the rush of emotions breaking through the facade of the stiff-upper-lip he might be supposed to have. His main Achilles is women, which has taken him from one incident in life to another and sees him nervous about being anywhere, lest a face from his romantic past shows up. “I’m just a bad writer who drinks too much and falls in love with girls.” It’s that kind of B-movie, hard-boiled quote that was the icing on the cake.

The story does have tension and builds rather well. Greene throws in moments of sublime genius here and there, yet this isn’t altogether top-notch writing.

To my mind, the biggest issue is of the narrator. Sure, he’s unreliable and that’s not a problem per se. What is a struggle is to have to make a shift from fictional fact to pure fiction within a sentence. There was a little too much of this for me and the jumpiness just wore off some of the polish.

It’s a pleasing short read and I’d recommend it for the quality of some of the quotes, the atmosphere and the sense of place, possibly for a pleasing holiday read or one for when you’ve got a cold and are hibernating.
Posted by Nigel Bird at 09:59