One Man's Opinion: BLADE OF DISHONOR by THOMAS PLUCK 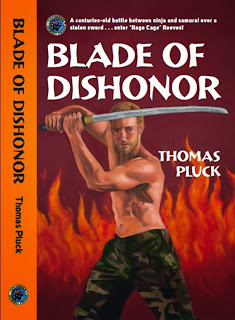 My eldest child will often describe wonderful things in life as ‘epic’. In that context, Blade Of Dishonor (US) certainly is. It’s also something of an epic in its own right.


OK, it’s not a poem, but the scale and the nature of the adventures of the main characters fits the bill.


It all starts when an ex-cage fighting soldier returns to his home town. He left to join the army as an alternative to going to prison after ruining the sporting future of the town’s main cop and, needless to say, the cop’s got it in for him from the off. Compounding the old gripe is the spark that ignites between Reeves and the cop’s on-off girlfriend Tara.


Reeves turns in to live with his Grandfather, Butch. Butch is an ex-soldier himself and runs an army surplus store in town. Butch’s prize possession is a Samurai sword that he reaches to when recalling his own wartime adventures back in WW2 and remembering his comrades. On top of it all, he’s made a promise to keep the sword safe and to Butch a promise on this scale means he’d put his life in the way of anyone coming to get it.


Someone comes. A Japanese business man wanting to buy the store and all of its contents. In the end, Butch has to agree, but not before selling the sword on to Reeves that day and therefore exempting it from the deal.


When it’s discovered that the sword is missing, all hell breaks loose.


At this point, the story breaks into a number of strands and they all come together beautifully.


My favourite element is Butch and the story of his life in Europe and Japan. It’s slickly written and has a real flavour of authenticity. During this story, a romance is also told and the true meaning of the sword is revealed.


The sense of energy and adventure is maintained throughout and the story fills out perfectly as all the pieces are put into place.


What you get is lots of stories in one. There are the love stories that bind characters together. There are family loyalties and newly-formed friendships that have deep meaning to those involved. There’s honour running through from start to finish. You get fight scenes that are written as if the author was write their in the combat. You get Ninjas and Samurai and warriors and tough-as-hell men and women. There are the feuds on local and national scales. You come across Black Dragons and sexy waitresses. There are chases and exotic weapons and prisons and Dirty-Dozen type rogue platoons. There’s humour that plays on language difference and on characters coping with the darkest of situations. There’s also the nutty wisdom of monks and life-weary characters who manage to phrase a saying like Basho-minus-the-structure.


I imagined this as a number of things – a film; a comic; a graphic novel – but am pleased that I got to read it first in its novel form.


One note of caution. I read this buy getting hold of the first instalment just to get a taste. When I finished it, it was so exciting and at such a point that I simply had to carry on. My tip would be to go for the whole thing and save yourself a little effort and a little cash as once you’re in, you’ll be in for the duration.