One Man's Opinion: THE BURGLAR WHO COUNTED THE SPOONS by LAWRENCE BLOCK 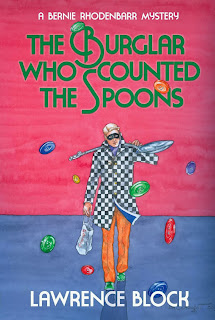 
The books have slightly different paces to fit the style.


Bernie Rhodenbarr is a slightly gentler character than those mentioned above. The books he’s in are more conversational and meandering than, say, Scudder’s stories.


Bernie’s a great guy. A bookseller of the old-school variety. In ‘Spoons’, he’s very much aware of the changes in the world of the old bookstore and the way technology has shifted the goalposts so far that he’s practically an endangered species.  It’s fun to hear his ideas on the modern world and there’s something about the way he talks about his main profession that made me want to go and browse for something second hand.


He gets involved in a few burglaries where a client of his has put in orders for material that’s in private hands. The setting up of the crimes and the carrying out of them are well told and we get to see the craftsman working at his second job of breaking-and-entering.


The plot is thickened when his old friend, policeman Ray, comes along to ask his advice on a possible murder. What Ray requires is a burglar’s eyes and an insight so that the mystery of the death of an old lady in question might be solved.


From this point on the story becomes a Whodunit?, though there are lots of other elements to Bernie’s life to keep hold of the interest in other ways – his relationships with the women and his ongoing friendship with his poodle-parlour lunch-mate Carolyn.


As I’ve read others in this series, I found that reading this latest addition was a bit like catching up with an old friend. It didn’t take long for me to find my feet as Mr Block did a great job of bringing me up to speed in a way that was helpful and not too over-egged (a series shouldn’t need so much back-story as to alienate old readers, but needs to offer enough of a canvas to allow new ones need to be able to get a sense of who the character has been in the past – this is done rather well here).


There’s an old-fashioned feel to the way the story pans out and I could feel the influence of Agatha Christie in the way the plot came together and eventually played out.


What slightly drags down my rating is the depth to which aspects of the information relating to history and collecting are explored. The facts are interesting and unusual, but they cross the limit in terms of interrupting the plot for too long, at least to my taste. I think Mr Block might also feel this; he practically says so:


‘If you already know all this, skip ahead...I’m just summing up here, but my feelings won’t be hurt if you choose not to read every precious word.’


That one issue aside, I did enjoy this trip to New York to meet up with Bernie anew and I hope I’ll get to pop over again at some point in the not-too-distant future.

I was fortunate enough to be sent a review copy of Spoons, but the book will be available on general release on Christmas Day - what a nice present for you or for someone you care about who likes good fiction. Pre-ordering is available...
Posted by Nigel Bird at 22:31