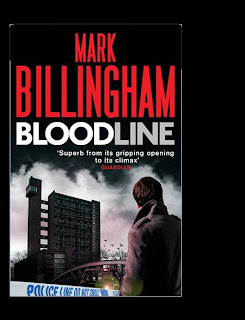 Bloodline (US)  is a really well put together novel. It works extremely well as a police-procedural, offers an excellent opportunity to explore Tom Thorne as a detective and in his personal life through the range of interactions he has with the people around him and has strong elements of a thriller about it as the book races to its conclusion.


Thorne is working a new case and it’s not long before he finds a link between it and another one up in the Midlands. The obvious piece the murders hold in common is a section of an X-ray photograph. When enough bodies turn up, it becomes clear that there’s another link, that to the now-dead serial-killer Raymond Garvey.


Once the fuller picture has been noted, there’s a race against the clock. The bloodline of the title makes clear the identities of all the future victims. These people need protecting from the new killer; problem is, not all of them can be located and not all of them want to be put into protective custody.


Amidst all of this, Thorne is attempting to cope with his partner’s miscarriage and the flood of emotions that he’s damming up from the rest of the world.


The book is written from a number of points of view, including from that of the killer. This allows for a deep insight to the crimes and to the police-chase and is handled extremely well to maintain a strong pace all the way through, even in situations that are static.


Thorne’s a superb creation. He’s a very human, multi-faceted guy. As a DI, he’s able to see the methods of the past and present merging and evolving and uses his updated, old-school approach to good effect. He has a hard edge to his rough diamond as well as a liquid-centre of kindness that leaks out when the occasional cracks appear on the surface. The soft-side makes him extremely likeable, the hard one very interesting indeed.


There’s also a superb supporting cast in Bloodline, made up of fully-rounded characters who each offer something to Thorne and to the plot.


The central premise is a strong and highly plausible one and Billingham doesn’t let this down at any point.


An excellent and highly engaging read.
Posted by Nigel Bird at 22:26