One Man's Opinion: THE OUTSIDERS by SE HINTON 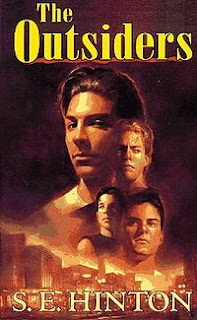 The Outsiders (US) and Rumblefish are films which I really loved and which came at a rather an impressionable age for me – late teens and hungry for life and cultural experience.


I’m not sure why it didn’t occur to me to go and read the books, but I didn’t.  I suppose I’ve always been more likely to see a film based upon a book I’ve read than the other way around.


The good news for me with this read is that the images I held from the film didn’t haunt my reading at all, the book doing all the work on that score.


The Outsiders is a great title.  It has roots in the way I felt when I saw the film and, strangely, the way I feel about myself now.


It’s the story of gangs polarised by economic and social divides told from the point of view of one of the poorer kids (ie Ponyboy the Greaser).


Ponyboy’s a great character.  He’s immersed in the culture of the gang and its codes, yet he’s open-minded enough to be able to rise above it and see the bigger picture.  As he eventually discovers, everyone has it tough in some way or another.


Through a logical progression of experiences, Ponyboy finds himself in the hands of the Socs (the rich gang), hands which force his head underwater at a fountain until his friend saves him by killing the aggressor.


Ponyboy and Johnny (the knifer) go on the run and there follows an exploration of their values and the vulnerability of their situation in life.


I won’t go any further regarding the plot.  All I’d like to say is that it opens up beautifully and even when it closes down it still leaves space for thought and reflection.


You’ll probably know that the author was only a teenager herself when she wrote the book.  Sometimes it shows through and I wonder if I made any allowances for that fact.  I think the book’s also written for a young audience of readers ready to explore the world and who want to suck up life’s experience – I also wonder if I made allowances on that score.


I think that, in the end, it’s such a great read that I did forgive it for any flaws or cracks in the way it’s written.  It does force me to ask a lot of questions about writing, too.


There are passages in The Outsiders that I’d want to be editing or changing or taking out and there are rules broken here that I try to stick to in my own work.  And then again, who the hell am I to be suggesting changes to this modern classic?  The best thing to do with this book is too leave it exactly as it is.


SE Hinton has done something very right in this tale.  I was completely engrossed to the point of me stir-frying vegetables with one hand and holding the book in the other because I didn’t have it in me to stop reading when I should have.


I found myself fully engaged emotionally and loved the characters and the setting.  There’s often a tension as the story moves forward that means that getting to the next page or next chapter is essential.  There are questions that are asked and left hanging, there’s style and cool, there’s the exploration of what it means to be part of friendship groups and of why teenage boys sometimes do the things they do (even more impressive in a sense that the author wasn’t one herself).


Above all, it’s the voice of the book that is utterly captivation.  It’s consistent and full of wonder and bewilderment as a teenager’s might be.


When I was half way through the book, I was so happy in my reading that I went to the computer and ordered a copy of Rumble Fish.  By the end, I’d placed an order for That Was Then, This Is Now.  I think that says a lot about the way I feel about the Outsiders, as it does that I can’t wait for those books to arrive through the post.