One Man's Opinion: THE END OF THE WASP SEASON by DENISE MINA 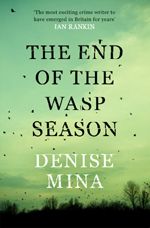 Happy New Year to you all.
I've not made many resolutions, but I've decided upon one course of action as a writer.  I'm going to spend much less of my time trying to tell folk about me and my work and I'm going to focus more upon the act of writing stories.  It seems like an obvious thing, but I look forward to the change of direction.
Should you find me wandering too far from this path, please remind me of what I just said.
The irony of this is that I have a giveaway of 10 copies of Mr Suit over at Goodreads.  This is only for UK residents as I can't really afford the extra mile on the postage.  If you're interested, follow the link.
And now to the main event.  A book review of a very good book.  I hope to be focussing more on this side of books, too.
Here goes:
THE END OF THE WASP SEASON (US)
A young woman is awoken in the home of her recently departed mother by a couple of teenage boys who seem to have a bone to pick with her.  Though it soon becomes clear that they are picking the wrong bone, the woman finds herself in grave danger and makes her bid for freedom.  Sadly for her, she doesn’t make it and the boys lose control as they stamp out all of her facial features.


DS Alex Morrow is sent along to investigate.  What the reader picks up from the early encounters with Morrow is that she’s from a complicated working-class family, that she’s no fan of her superiors and that she’s pregnant with twins.  She also cares about her new victim and has to fight with the men around her to get to see this as the murder of an innocent rather than simply another paid-by-the-hour job.


The teenage boy killers attend a private, very exclusive Scottish school.  Thomas and Squeak are soon separated when Thomas leaves for home after his rich and infamous father has committed suicide.  Lars Anderson has been losing the money of many in the recent financial crash, a crash that impacts upon many in this novel.


Morrow encounters an old friend in the form of Kay, the cleaner who once worked for the victim and her mother and continues to clean for other families in the area.  This opens the doors to a range of complications which make rather uncomfortable reading in a pleasure/pain sort of way.  It's a relationship and a set of consequences that I particularly enjoyed following.


The resolution of the story is for you to find out.  All I’ll say is that it winds up with a growing sense of the need for justice and an accelerated desire to reach the end and find out what that might be.  There was no let down when I finally got there, just a perfectly formed moment that I genuinely hadn’t expected, one that passes comment on a world that so often doesn’t seem fair.


It is a police procedural, but it has a huge amount to offer beyond that.  The stories seem to me to be about people and the way they are affected by crime as much as they seem to be about the serving of justice, after all justice as offered by the legal system will rarely have the power to redress the injustices of our society.


Mina has a great empathy with her characters.  Seems to really see the subtle ways in which they interpret the world and are formed by their experiences of it.  Can paint detailed pictures of the lives of her characters by sketching in minor details that are striking in way they expose the inner workings of the people in this book.


She also explores identity in a number of ways.  No one is as they seem, each person has a life beneath the veneer of their stereotypes or the first impressions they create.  Class, religion, personal flaws, successes and tragedies are all brought to the surface in a book that refuses to leave human beings as two-dimensional items.


It’s a very engaging read that’s written with real skill and feeling and I’ll definitely be reading more of Mina’s work in the future.  Very good indeed.
Posted by Nigel Bird at 15:31