One Man's Opinion: CRIMES IN SOUTHERN INDIANA by FRANK BILL 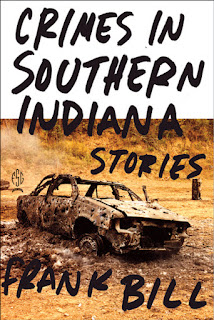 
Or to quote Donald Ray Pollock:  ‘Good Lord, where the hell did this guy come from?’


Frank Bill describes his work more succinctly and directly than I’m about to when he says at his blog, ‘House Of Grit’, ‘I don’t waste words, I write them.’


In ‘Crimes In Southern Indiana’ we have a book to cherish.


Essentially a collection of short stories, the work grabs hold harder with each page read.


Stories overlap as characters and histories reappear in new situations, the circles becoming tighter and tighter until the lines of definition begin to blur and it begins to feel like a novel and like a work of major force.


They tell of a culture that seems completely engrained in the communities and families we get to visit.  It’s a culture of depth and of major contradiction, one that an outsider might feel the need to eradicate without wanting to throw out the babies with the bathwater.  There’s good and bad in there and they’re so tangled together that there’s little hope of separation.


Family loyalty and blood ties are deep-rooted.  Revenge is on an eye –for-an-eye basis; better still, two eyes are taken for the one.  History and economics has left the people impoverished and forgotten.   War veterans pick up the pieces.  Police do what they can and sometimes what they shouldn’t.  Children are ruled with iron-fists and belt-buckles.  Need drives all, even the selling of a young girl or the delivery of a knife into a throat. Guns are as part of daily life as pieces of furniture.  Hunting takes on new boundaries.  Friendships are tight until they aren’t.  People react to survive in any way they can.


In all the snapshots shown, the centre of the event is often an act of brutality.  Within a short space of time, Bill is able to explain lives and reasons and facts without ever being heavy-handed.  What is clear is that black and white aren’t really colours – they’re illusions.  There were times during the collection that I was applauding acts of immense brutality and I’ll applaud the next time I read them, too.


What I love about a really good short story is the way that it can engage with feeling and with power to leave me completely bowled over.  The effect of stringing a series of interwoven tales of the highest calibre is absolutely stunning on all levels (stunned by craft, plot, character, situation, imagination, heart and courage).


Frank Bill is a man who can take hold of the emotional core of a situation as if it were some winged insect, and at the end decide whether to squash it or let it go.  He never shirks from difficult finales and tells things exactly as they have to be.


Miss this one and you’re making a huge mistake.