Karo Hämäläinen: Dancing with myself 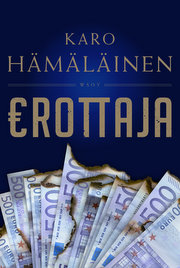 Piles of papers have crowded the table. Somewhere in between is a glass full of tap water, some dozens of pens, a couple of unread books (and some read ones), chewing gum, an empty Pepsi Max bottle and a laptop. It looks like Karo Hämäläinen has forgotten the interview. The photographer and I hesitate at the door.

"Just come in, just come in," he says. "It took me hours to build an impression of working hard and paying no attention to what my room looks like."

As we sit – I on a chair, the photographer on the saddle of an exercise bike standing in the corner – Hämäläinen checks the latest events in the stock market. It's well known that the author is an eager small investor.

"Mr. Hämäläinen, you wrote many books before you made your break-through with a financial thriller,

The Buyout. How did you come up with the idea of writing a financial thriller?"

The Buyout as well as The Bailout are wretched thrillers, because the reader doesn't get what he wants, i.e. fire arms, piles of dead bodies and a happy ending. I call them thrillers as I have heard that thrillers sell better than so called literary fiction."

"Yes, yes, I know. They are very good novels, and yes, I know, I have written them in the form of a thriller. Why is that? Because I love books you can’t put down. I have written many dull books. And read even more. I'm already 35 years old, so I don't have time to write any more of those. In my opinion, you don't have to say good-bye to literary standards even though you write entertaining books. Some might think it's even more challenging to write books that are both deep and entertaining."

"You write literary social novels that are highly entertaining."

"So what is a financial thriller? How does it differ from an action thriller?"
"Just guess how many times I have answered those questions."


"Not bad. Well, in a financial thriller, the things the characters do and the suspense are fundamentally motivated by the investment world. Financial events aren’t just the milieu like in some action thrillers set in the world of high finance; instead, everything in the thriller starts from the logic of money. The characters’ greatest fear is not dying – they’re afraid of something even more important: losing their reputation and their money."

"Your latest novel The Bailout is set in the economic crisis in the Euro-zone. Isn't that a boring theme?"

"Yes, it is. And finance as a whole is boring. You have to be paid at least one million before you start working. For example, gardening is far more interesting. People are willing to do garden jobs for an annual salary of €20,000."

"One of the three main characters in The Bailout is a hedge fund salesman. Have you invested in hedge funds?"

"Oh yes, once. I got mine back. After that, I have steered clear of algorithm miracles."

"You don't believe in hedge funds?"

"I do. They are fantastic instruments that generate piles of bucks to hedge fund managers. But they are disastrous for the investor's wallet. Hedge funds are just speculation and therefore have nothing to do with investing."

"However, investing and the euro crisis are not the main themes in your newest novel."

"That’s true. The Bailout is about people's tendency to behave like the stock market. They pretend to be something they are not. Like you. You act the role of a literary journalist with your pen and your A5 writing block. You try to ask challenging questions. You haven't read any of my books but you give plausible statements about them, because you have eyed some articles and book reviews."

"It's impossible. The Bailout isn't out yet."


(b. 1976) has two
passions: literature and the stock
market. The first combination of his
passions,
The Buyout, came out in
2011. Nominated for the Savonia
Prize, it was loved by readers and
critics alike. http://karohamolainen.wordpress.com/in-english/

(WSOY 2012, 380 pp.)
A topical, timely novel delving into the core of
the European debt crisis.
The socialist opposition leader of Hellenia is ready
to do his last favour to his fatherland: to sign – and
to resign. A young and eager hedge fund salesman
has his once-in-a-lifetime opportunity to
show his boss what he is capable of. When the
politician is kidnapped, billions of dollars are at
risk (as well as some secondary matters, such as
human lives).
In
The Bailout, people and countries behave like
the stock market: they pretend to be something
they are not.


Critics have compared The Buyout to Tom Wolfe’s
Bonfire of the Vanities!


An intense 23-hour
novel in the triangle
of politics, crime
and hard finance