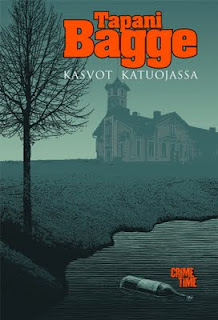 Before kick-off, I'd like to mention that the book My Friend Miranda is free today and over the coming weekend.  It's not a crime book at all, but is the story of a young girl growing up.  It should work for avid young adult readers as well as grown ups.

1. You say you’re a writer. What have you written?


I have published over 70 books, among them 14 crime novels, a couple of short story collections, dozens of children’s books and youth novels. I’ve edited anthologies, translated books from English, made scripts for TV, radio and comics and written a couple of stage plays. For the first ten years of my career, I wrote pulp stories for the Finnish Jerry Cotton, and FinnWest, a Finnish western series.


2. Let’s concentrate on your crime novels. What are they about?


I started out in 2002 with Puhaltaja, (The Jack), the first book of Hämeenlinna Noir, so far a six-novel-series about the crooks and cops of my home town. The fifth one, Musta taivas (Black Sky), won the Clew of the Year Award of the Finnish Whodunnit Society and was the Finnish nominee for the Nordic Glass Key Award. It was recently published in German by Suhrkamp as Schwarzer Himmel. We also have a deal for the next novel in the series, Kummisedän hautajaiset (The Godfather’s Funeral). Hämeenlinna Noir books are darkly comic and at times violent. There really is no hero in them, no good guys or bad guys, just people who make wrong choices, sometimes against their better judgement. The cops and crooks are equally human, and one of the cops (Detective Leila Pohjanen) and one of the crooks (police informant and repenting burglar Allu Nygren) are even getting into some kind of relationship, and finally have a baby together.


I am currently working on two crime series. One is about the hard-luck lawyer Onni Syrjänen of my birth town Kerava, a small railroad community near Helsinki. Onni doesn’t belong to the bar any more, even though he regularly goes to one. Onni may bear some resemblance to the classic private eyes like Philip Marlowe or Matthew Scudder, but basically he’s a loser. In any case, he does his best to stay sober and help his friends, relatives and other clients, who are usually criminals. His paths often cross with characters of the Hämeenlinna Noir novels.


4. And the second ongoing series?


My historical series follows the trials of detective sergeant Mujunen of Valpo, the State Police. The first novel of the series, Valkoinen hehku (White Heat), is set in 1938, when the scars of the Finnish Civil War of 1918 are still fresh. Mujunen tries to solve the murder of a beer brewer´s son and locate some missing documents and a missing male secretary of a German arms dealer. At the same time, there are several assassins plotting a hit on State Minister Kekkonen, who is fighting against the extremists on left and right. The second book, Sininen aave (The Blue Phantom), depicts the summer and fall of 1940, just after the Winter War, when the Finns have to choose between the plague and the cholera, Nazi-Germany and the Soviet Union. A Finnish passenger plane explodes en route from Tallinn to Helsinki. The recently widowed Mujunen starts an affair with a Lithunian danseuse, who may have a hidden agenda, and tries to find her brother. There may also be a big conspiracy or two on the make. A sample of the book is online in English.


The third novel in the Mujunen saga, Musta pyörre (Black Whirlpool), is coming out in Finland this spring. The year is 1942 and the choice has been made. Again, Finland is at war against Russia, this time together with Germany. Reichsführer-SS Heinrich Himmler arrives for a visit, and Mujunen is ordered to be his bodyguard. Himmler offers the final solution to ”the Finnish Jew problem”, the underground communists are sabotaging the Finnish war effort and killing policemen, and not one but two femme fatales are entering Mujunen’s life. Things get pretty hectic for him as the story progresses.


Mujunen is a man of principle. He won’t hit the suspects to get the truth, because he knows that can distort the truth. He won’t bother to report the rationing crimes, and he frequently resorts to the black market himself. After his wife died during the Winter War, he’s had his share of affairs with sad endings. He’s a reliable workhorse of the State Police, but he’s also a man of conscience. When his bosses fraternize with Gestapo and SS and follow their example in too many issues, Mujunen begins to have his doubts about the justification of his work. Drinking doesn’t help, so he takes action. And if the law is wrong, you have to break it. Or at least bend it a little.


7. Why do you write crime stories?


When I was twelve, my family and I paid a visit to one of my uncles. He was in prison, and he wasn’t there as a guard. He was there for a good reason, but he was still the same uncle – he hadn’t grown any horns on his head.


It was some sort of revelation for me. I understood that the cons are human, too. I try to keep that in my mind when I write.


About that time, I was introduced to the works of Raymond Chandler, Dashiell Hammett and Donald Westlake, and they made a lasting impression. Later, I’ve found many other great crime writers, as well as writers of other genres. I also like humour in my books. In my own crime novels, it’s mostly black and sometimes absurd. My take on life.


8. Why do you write about history?


We humans seem to make the same mistakes again and again. Maybe it’s too late for us to learn anything from the past, but you can find some great stories there.


9. Why don’t you write about criminal masterminds?


Simply because there aren’t too many of those around. When I was in high school, one of my pals decided to rob the post office. Until then, he had been a pretty decent guy, he even


coached soccer juniors. Maybe he had some money problems. Anyway, his robbery was a classic: he made almost all the mistakes one can think of. He borrowed a target pistol from a friend, rented the getaway car on his own name, went to the post office where his girlfriend (later on, ex-) was behind the counter, got some money, left the getaway car with doors open in the parking hall of the local department store, and was at home counting the money when the cops arrived. On his way home, he had even dropped in at the pub to brag about his deed.


In real life most criminals are sad cases. I have no idea where all the criminal masterminds in fiction spring from. Probably from other books and movies.


Next, I’m writing the fourth and final novel about Mujunen, titled Punainen varjo (Red Shadow). It is set right after the Continuation War, with the Second World War still raging elsewhere in the world. The Russian Control Commission casts a big shadow over Finland. Mujunen is now head of the counterspy department in the State Police, with new leaders, after the old ones escaped to Sweden, and he investigates the mysterious death of a Soviet captain in Helsinki. He has to report to the Russians every night, and there are rumours that the Soviet Union might use the murder as an excuse to occupy Finland. Will Mujunen find out the truth – and can he reveal it?


I also have some plans for a new Onni Syrjänen book and the return of Hämeenlinna Noir, but we’ll see about that.

”These are dreadful times”, says the prime minister
of Finland in 1944. A treaty of peace has just
been concluded between Finland and the Soviet
Union and the Finnish troops are now fighting
Germans in Lapland.
The Russian control commission has occupied
the Hotel Torni in Helsinki, casting a long shadow
over the entire country. Mujunen is interrogating
prisoners of war, but is called to investigate the
murder of a Russian captain – and to report to the
commission. Are the Russians using the murder
as an excuse to occupy Finland?
Tapani Bagge (b. 1962) is a versatile
author of novels, screenplays,
children’s books and radio plays.
Winner of several literary awards,
Bagge is also an international
author whose crime fiction has
been translated into German.
www.tapanibagge.wordpress.com

“Bagge is a great writer, who
really knows how to
put together a good plot.”
Forssan Lehti