So, the Spinetingler Awards are once again upon us.

If you haven't heard of them, I'd suggest that you pop over to the Spinetingler site and check out the nominations.  They'll give you lots of pointers for reading, blogs to follow, reviewers, zines and stories that will offer as good as a compass bearing in the crime-writing world as you're going to need.

I've been lucky enough to have my story Hoodwinked nominated in this year's Best Short Story Online list, which makes it 2 in a row for my collection Beat On The Brat.

Pulp Ink also gets a pick in the best anthologies (and that's hotter than hell, that list) and Dirty Old Town gets a mention for its cover.

I find it all very exciting.  Thanks to Spinetingler for doing all the hard work.

In that Best Story Online list, you'll see enough talent to sink an ocean liner.  It'll be a Titanic struggle.  Except we're not fighting.  In fact, I'd like to have you consider today's guest for your vote (ideally, you'll read all the choices and select from that point).

Court Merrigan has a lot to talk about - he's been around and he's written a lot.  It seems that lots of his irons are about to be pulled out from the fire with a glare of white heat.  Here's what Court had to say when he caught up with himself:

A writer of pulp in sundry forms. Too Twittery?

I write stories encased in a solid armor of artfully hardcore sentences. That crank your tulip?

My short story collection, MOONDOG OVER THE MEKONG, is coming out soon from Snubnose Press. A baker’s dozen of stories of guns, crime and general mayhem. The stories are like that Johnny Cash song, man, they’ve been everywhere: the muddy Mekong – the sex capital of Asia, Pattaya – Tokyo – the Arizona desert borderlands – highlands Wyoming – Afghanistan and the bleak horizons of a South Dakota Indian reservation – Bangkok – the mountains of a Colorado resort town – the parched Himalayas – the trailer park across the tracks of your hometown. Cock fighting and crank cooking. Shrapnel wounds and slathering hellhounds. Dirt-road getaways and motorcycles crashing into water buffalo.


They aren’t traditional crime tales. No PIs and the cops only get there in time to chase gun smoke. They’re stories about the folks whose eyes you avoid in the check-out line, the ones who don’t show up at your high school reunion because they’re on the lam. Folks who could be you, if only you weren’t so damn smart.


No, justify YOUR existence:


Oh. Not sure I can. I am American, after all, vacuuming up vastly more than my fair share of world resources, scribbling late into the night when my kids are asleep, bottle of bourbon handy. Working toward that holy grail: getting paid to be tell stories. Other than that, I’m just a normal guy. Take my daughter to soccer practice, feed my son Cheerios. Get up in the morning and go to work.


How’d you get here?


Mainly I chose my parents well. Got born in the First World, received a top-notch education. Everything after that is a footnote, really. You have to be on third before you can steal home, you know?

My wife’s from the Third World. She keeps me grounded. When we lived in Thailand it was easier; I’d walk outside and there was a whole village who laughingly tolerated my paunchy white Westerner predilection for shutting myself up in a room alone for hours on end. Here in America, where being a hermit is marginally more socially acceptable, I have to work harder to bear this in mind.

And how’d MOONDOG OVER THE MEKONG get here?

A lot of stories, strung out over some years. I wrote the title story back in 2004. Been looking for a publisher for some time, getting lots of no’s. Then the gentlemanly Brian Lindenmuth of Snubnose Press responded to my pleas. I’m still sort of stunned, to tell you the truth.

So now that you’ve got some skin in the game, what do you think is the future of publishing?


Who knows? I do think the rise of self-publishing and the likely downfall of traditional publishing has, paradoxically, made the gatekeepers even more important. Ebooks have unleashed a cornucopia of writing on the world. Too much to even begin to try and choose from. Instead, folks are going to rely on tastemakers, and read accordingly.


The big question is: who will those tastemakers be?


Yep, and yet somehow I still don't have a flying car.


First help get MOONDOG OVER THE MEKONG into the world. Sometime this year or next. Been a long, long while coming and let me tell you ,there was a long succession of days in there when I wasn’t sure it was ever going to get here.

Speaking of, the cover for MOONDOG is under production as we speak. Here’s a prototype. 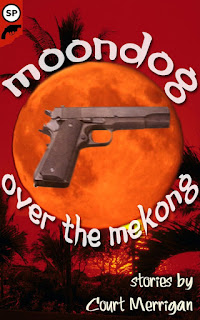 What do you think? Thumbs up, thumbs down? I’d love to hear about it in the comments.


In a similar vein, one of the stories to be included in the collection, "The Cloud Factory," is up for a Spinetingler Award. If you'd like to vote, headright here. And if you’d like to vote for me, I'd appreciate it mucho much. I really would.

Here, a sparkle girl for you. She says please better than me.


And what are you working on now?


I've got a couple projects on the burn: a historical fantasy involving bounty hunters, a tiger-killing poet exile with a price on his head, a slash-and-burn rebel Buddhist monk, a girl-queen, a marooned seafarer bounty hunter, a scorned general with a serious lust for vengeance, purposely illiterate hill tribes, and the wiliest lady of the court this side of Game of Thrones, all set in a semi-mythical Southeast Asia.


Also at work on a post-apocalyptic Western crime noir.


And some short stories, such as a mild homage to Do Androids Dream of Electric Sheep? set in Wyoming’s banana belt featuring a washed-up community college professor. And then there’s another about a fugitive slave girl who takes some gory revenge on her masters and then books it for the hinterlands, baddies in full pursuit.


When can we expect to see these released into the ecosystem?


Soon, I hope. Working on some deals I can't talk about just yet, but rest assured, I'll be yapping on about them when I can.