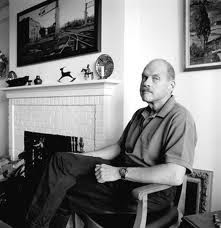 It seems a long time ago now that I met Lawrence Block.

I say met him, but bumped into might be a little more accurate.

I was at the Hay-On-Wye literature festival with my brother. We were touting the books we were putting out as a small-press outlet.

The Rue Bella turned out to be a very decent magazine indeed and housed some very big names (not just long ones). The issue I think we were peddling, though, was only our second. It was called 'Dearth Of The Cool' and the cover had a friend of ours (Fat Mark) as it's portrait, a set of clockwork teeth in his mouth and taken with a fish-eye lens. It's pretty frightening to look at, I'm sure you'll agree. Seemed like a good idea at the time and we did get better, honestly. 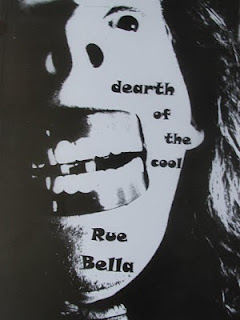 The best things in there are a short story by Rupert Waldron about a girl who worked in a sandwich shop and a snarling poem by Bette O'Callaghan.

Mainly we stood on street corners and at the entrances to the site, testing our shy selves to the limit. I guess it's about the same level of salesmanship as I'm now using online for Dirty Old Town , which suggests I haven't moved on as far as my dreams back then might have hoped.

Anyway, I went along to see him in an event with Ian Rankin. It was ruined by the compere, but there was no denying the pedigree on show.

After the event as Mr Block headed for his taxi, I stood in his way, thanked him for the effort and offered him 'something to read on the aeroplane'.

OK, it wasn't my finest moment on the one hand, but on the other it is unforgettable.

Since then I've read a lot more of Mr Block's work and I've never seen him put a foot wrong.

He's a living legend, surely, a real gentleman and has one of the finest writing records of anyone around today.

Take off your caps and bow your heads, Mr Lawrence Block is entering the building.


Your new book, A DROP OF THE HARD STUFF, is your seventeenth Matthew Scudder novel, and the first since ALL THE FLOWERS ARE DYING in 2005. 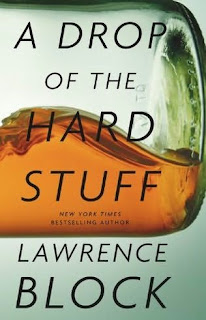 LB: Is that a question?

Sorry. I guess the question is why did you stop writing about Scudder, and why did you resume?

LB: That’s two questions, isn’t it? Always feast or famine. You know, I don’t schedule these things. I write the book that happens to come alive for me. I thought I might be done writing about Scudder. He’s aged in real time, you know, and by now he’s a little old for adventure. And I felt that ALL THE FLOWERS wasn’t a bad place to stop.

LB: And then it struck me one day that I’d had a stretch of unexamined years in his history, more by happenstance than by design. There’s a gap of around seven years between EIGHT MILLION WAYS TO DIE and OUT ON THE CUTTING EDGE, which gives us no stories from the years of his early sobriety. Now that’s hardly an uneventful time for most of the people I know who’ve gone through it, so why should it be thus for Scudder? But, because I was writing other things myself during those years, any adventures he may have had in his fictional universe went unrecorded.

Thus a drop of the hard stuff, set in 1982-3. But this isn’t his first flashback appearance, is it?

LB: No, WHEN THE SACRED GINMILL CLOSES was written in 1985 and took place in 1975. That was a ten-year backward glance; this is closer to twenty.

Will there be more Scudder novels? And will they also be set in the past?

LB: I don’t know. As I said, I don’t schedule my work, and I can’t make books happen by force of will. An idea has to engage me.

Didn’t I hear that you were giving up writing?

LB: Well, it’s hard for me to guess what you may or may not have heard.

LB: I know what you meant. I don’t think I ever said I expected to stop writing altogether, not this side of the grave. But it’s true that I felt I might be done writing novels. I’ve done so many of them, you know. Perhaps fifty under my own name, and at least that many under pen names. It seemed to me that anything I’d ever had to say to the world I’d by now said many times over. And writing a novel takes a good deal of energy. So yes, I thought I might be done with that.

What would you write if not novels?

LB: Short stories. I wouldn’t presume to call them easier than novels, but there’s a good deal less heavy lifting involved. It’s less of a commitment of time and energy. And I write a month column, “Generally Speaking,” for Linn’s Stamp News, and a regular column, “The Murders in Memory Lane,” for Mystery Scene. I thought that would be enough.

But you found that—

LB: I found I had more energy than I’d suspected. And, you know, avarice is a powerful motivator.

You wanted the money.

Is that why you’re having all your early work reissued in ebook form?

LB: It’s one reason. Many years ago an English crime novelist named Peter Chambers repeated what he’d heard from an older colleague: “Take care of your backlist, my boy, and one day it’ll take care of you.” My backlist is voluminous, and the medium of ebooks allows me to make it available to today’s readers. And I’m more than happy to do so.

Many of those books originally appeared under pen names.

LB: Indeed they did. And many of those works I preferred not to acknowledge.

But you’ve changed your mind. Avarice?

LB: Not only that. I’ve also come to realize that it’s presumptuous of me to judge my own work. The fact that I prefer more recent efforts, that much of the early work I myself would not care to read now, says more about me than it does about the work. I wouldn’t be anywhere near as hard on the early efforts of my colleagues. So what sort of false pride justifies my applying a harsher standard to my own youthful efforts? And who am I to keep readers from enjoying them?

You’ve recently published 40-plus backlist titles with Open Road Integrated Media. Will there be more?

Anything new on the horizon?

You seem to think highly of it.

LB: You picked up on that, did you?

Then too, this seemed like just the book for Jill Emerson to put her name on. I did seven books as Jill Emerson some years ago, ranging from sensitive lesbian fiction through structurally experimental erotica all the way to a mainstream novel that Redbook serialized. They’re all books of which I’m proud, books I’m glad to see available again from Open Road, and GETTING OFF seemed a fit addition to Jill’s body of work.

LB: Before that, really. A pair of books for writers, THE LIAR’S BIBLE: A Handbook for Fiction Writers and THE LIAR’S COMPANION: A Field Guide for Fiction Writers. For fourteen years I wrote a fiction column for Writers Digest Magazine, and two book grew out of that column---TELLING LIES FOR FUN & PROFIT and SPIDER, SPIN ME A WEB. Well, I went on writing the column for a while after the second of those books came together, and my uncollected columns amount to more than enough material for two new volumes. And they’ll be appearing this year as original ebooks---E-riginals, you might say---courtesy of Open Road.

So retirement seems to be a pretty active enterprise for you.

Is that a question?

LB: Never mind. I take you point. I hadn’t planned on working so much at this stage in life. But I seem to be enjoying it, so I’m not complaining. We’re done now, right?


And thank you, LB. And now I'll be able to go to sleep without needing to say the prayer 'please keep me alive till I've posted the Block interview'.


http://www.lawrenceblock.com/index_frameset.htm
Posted by Nigel Bird at 22:54