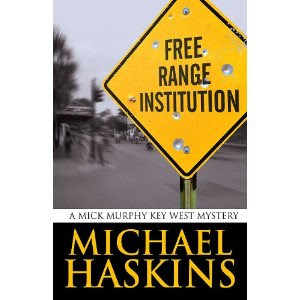 Not really. While writers seem to vacation here, few writers live here fulltime and even less write about the island. My friend Tom Corcoran has a long-running series – the Alex Rutledge Mystery series – set in Key West, but I can’t think of anyone else besides Tom and me with a series set in Key West. You don’t run into many of New York’s published elite here or publishers. If they come, most of them must continue to live as if they are still in Manhattan and avoid the local riffraff like myself. You must remember, Key West is a vacation destination and we accept everyone, even the elite.

Why did you choose Key West as your home?

I grew up outside Boston and then went to Los Angeles – kind of jumping from the frying pan into the fire – and after my West Coast stint, I need to escape earthquakes and smog. I was spring break vacationing in Naples, Florida with my twin daughters – Seanan and Chela – and two of their friends, and it was raining. The local news showed Key West as sunny, so I packed up the four teenagers and drove the eight hours. I told them I’d never be this close to Hemingway’s house again, so off we went. We stayed at the hotel the Beatles stayed at on South Roosevelt Boulevard, (gone now, replaced by time shares) and that made them happy; we spent two days walking, shopping, and whatever tourists do downtown – including two visits to Hemingway’s home. They discovered Jimmy Buffett’s restaurant and T-shirt shop and I discovered my Muse.

I feel in love with Key West, the history, the architecture, the water, the diverse people and felt at home, something I hadn’t felt since leaving Boston. I don’t know what else it could have been if it hadn’t been a Muse guiding me to where I belonged, where I could write and be happy.

It’s fun. I spent five years as the business editor/writer for the daily Key West Citizen and then five years as the city’s public information officer and both these jobs afforded me an insight into life in Key West that most people are not privy to. It has helped my writing and it has given me contact with business people and politicians so I can pick-and-choose where my stories go. It has also given me the ability to present the island more honestly than a writer who only visits the island for research or spends six months or less “absorbing” Key West. One of the comments I often get from locals is that I captured the essence of Schooner Wharf Bar, the Hog’s Breath, and other local hangouts, and that is welcomed praise since these people frequent the establishments.

Tell us about the new book.

Thanks for finally asking!

Free Range Institution was released in mid February and is the second in my Mick Murphy Key West Mystery series. I’ve just signed a contract for my third in the series – Car Wash Blues – and it should be out in 2012. We really don’t have crime in Key West, not like Miami, Los Angeles, and Boston. I am a news junkie and read newspapers and newsmagazines looking for that quirky news crime story from anywhere. When I find it, I run it by a few friends in law enforcement or my military intelligence source. When it’s possible, usually with some adjustments for the Keys, I work on bringing that crime to Key West. In Free Range Institution, I have a corrupt city commissioner and others attempt to smuggle a drug residue from cocaine processing – “paco” – into the states via Key West’s fishing fleet. In between the opening when a body comes off a hotel roof and lands on a car on Duval Street and the RPG attack on the good guys at Cay Sal Banks, I shoot up much of Key West and the body count and attacks turn the small island into the old west. What I did after discovering ‘paco’ the drug was come up with a probable scenario involving Key West. With the help of my sources, I think I pulled it off pretty well.

What is next for you?

Car Wash Blues, as I said, is due out in 2012 and I am busying working on my fourth in the series, Stairway to the Bottom. In Car Wash Blues, I bring two Tijuana, Mexico drug cartels to Key West. Both are after Mick Murphy and there is a lot of what is happening today in Mexico between the cartels and the Mexican government in the book. There’s also betrayal of old friendships and a link to Murphy’s past in Mexico and Central America. I should mention I spent most of 28 summers in Tijuana attending the bullfights and had the opportunity to befriend many of the city’s residents. I also have followed the LA Time’s long-running series “Mexico Under Siege” and used it as a research tool. In Stairway to the Bottom, I get away from drugs, dredge up some old Cold War agents in search of millions of dollars worth of diamonds, a hit man for Whitey Bulger from Boston running away from witness protection, and mix it all together. It is going well and I am having fun bringing all these people to Key West. Anyone that wants to discuss my books can come to one of my book signings, the information is on my website:

Michael will be signing copies of his book at Murder By The Book, Houston, on Saturday 23rd April (the day after Joe Lansdale, no less) at 4:30 pm. If you need more information, http://www.murderbooks.com/signings.php is where you'll find out more.