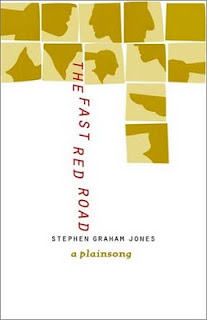 Christmas has 12 days, or so they say. Dark Valentine are running a short series of 12 stories, starting with A PARTRIDGE IN A PEAR TREE and finishing in three days time with TWELVE DRUMMERS DRUMMING (I think, unless it's twelve Lords-A-Leaping). I'm late in on things as I've been away, but the two I've read so far by Paul Brazill and Cormac Brown have been well worth the effort.

To delcare my vested interest, I put together the story for Eleven Pipers Piping, which should go up tomorrow.


If I were to sift through all your interviews and podcasts and whatever, I could probably rig together a somewhat cogent ‘top 10’ kind of list of yours—your favorite books, movies, songs, all that. The ones that matter, and keep on mattering. However—and I know this because I’ve done some interviews myself—aren’t you always walking away after that last period’s been dropped, after it would be awkward to call up whoever just interviewed you, aren’t you always just then thinking of that one title that, as far as you’re concerned, doesn’t just characterize you, but summarizes you? A clutch of titles that you feel you’ve betrayed by not mentioning them, and only wish you could finally maybe say somewhere?

Thought that was just a Meatloaf title. Anyway, next: Say you’re seventeen, living in Colorado Springs, going to this high school on the Air Force Academy, where you’re a “Cadet,” as unlikely as that seems. Granted, most days will probably be like this: get to school in some bad-idea kind of way, get caught lobbing ice onto the superintendent’s head, fall down in English class, forget to come back for lunch for a couple of periods—all the usual stuff that you can really say just with “seventeen.” Only thing that’s maybe not included in that word is the amount of hackysack you and your friend Paul play. “Paul,” I mean. And the amount of brownie mix and saltines you eat after school. That’s the regular routine. But routines are only ever finally interesting when they’re deviated from, wouldn’t you say? Now, getting to the question here: Was your and Paul’s routine ever broken, say, by a real live true actual monkey wondering out of the trees of the Air Force Academy one day?

Check. And now another, but from further back, if you can. Apparently, when you were, I don’t know, I’m thinking it must have been eleven, or twelve, some impressionable age like that, there was this little store by the trailer park, call it “Pecan Grove” if you want, and, whenever your mom was going to town and you were along for the ride, you’d get to stop there, drop a quarter or so, come out with a comic book. One day you came out with Secret Wars #3, wasn’t it? The one where the Hulk’s holding up a whole mountain? Could have been #4, I guess. Anyway, seeing that, you were of course hooked, were asking to ride along to town each time, and—correct me if I’m wrong—but didn’t there come a time in this cycle of wishful identification where you could often be found outside during a lightning storm, holding up various metal rods? Not because you wanted to die, nothing dramaticlike that, but because you wanted an origin story. You knew that all fantastic accidents had the potential to make you into a superhero, right? If, like, say, Longshot, your intentions were pure. If you were promising to use your powers for good.

You have to squint to hold a rod straight up in the rain.

Great, thanks. Okay . . . like everybody, I’m sure that you’re squirreling away Sky Malls around your place, with all the stuff circled that you’re going to buy someday when you’re super-rich—all the stuff that’s so, so perfect, stuff you couldn’t even have dreamed of if given a notebook and ten years. And, like the superhero stuff, I’m sure you’ve even made secret deals that, if that cash ship comes in, you’ll not be one of those rich people who buys BMWs and all that, at least not while there’s people starving on the streets. We all think we’re good like that, of course. Until we’re standing on the BMW lot, anyway. But, baby steps , right? Let’s take it small, at first. Say Spielberg and Lucas get in an ego-driven, very public bidding war over rights to one of your books, and it’s selling better than Dan Brown and Stephenie Meyer’s lovechild’s memoir as-told-to Oprah anyway, meaning your Chunky Soup days are over, if you want to them be. Every meal, now, you can eat just any-anywhere you want. What three places would you hit the most, you think?

Fair enough. Panda Express’s honey-walnut shrimp is maybe the current zenith of civilization, at least in small amounts. Switching gears, though: basketball. You don’t watch it as much as you used to now that you’re cable’s turned off—you’d pick Psych over a playoff game anyday, though—but, in high school, basketball was your main source of nutrition, and through a lot of college as well, and on up until about a couple of years ago. So, even if you’re the kind of highlight-reel, fairweather fan who likes pro more than college, are into individual heroics more than team play . . . or, no, specifically because of that, yeah. Because of that, this is your question: Michael or Kobe? I mean, as far as skill-set goes, Kobe’s pretty hands-down got Michael there, but, for all his talent and ability and hours in the gym, it was never finally about skill with Michael, was it? No, Kobe, he plays because he loves the game, right? Because he lives in the game—he is the game. Michael, though—correct me if I’m wrong here—his first love, it was never actually the game. Michael’s first love, it was destroying his opponent. It was leaving his opponent broken and shattered out there, whatever the cost. He could have been a boxer, an astronaut, whatever, it just so happened he played ball. And, all the skill in the world, all the talent—it’s Clubber Lang and Rocky, right? It’s Hulk, under that mountain, refusing to let it crush him?

I should have said “Your Latest Trick ” earlier, up there. Dire Straits. And Bob Seger’s “Main Street” too. Maybe Springsteen on “The Promise.” Johnny Van Zant with “Brickyard Road.”

Hunh. Let’s take this back to bookland, then. You cite all kinds of influences for your work, for your life. Waylon, Philip K. Dick, Pynchon, King—Waylon and Pynchon born the same year, yeah? just like Ulysses coming the same year we found King Tut (I’m making fun of you here)—and various dads and stepdads and uncles and, okay, sure, Wes Craven too, though I think you really mean just Scream. Taking all of that into account, though, if you could be any artist . . . no, any novelist—we’re in bookland, remember?—if you could be any writer writing today, who would that be? And, before you answer, understand that this isn’t the same as asking whose checks you’d like to be cashing. I mean, if it’s just money, then King’s the obvious choice, and you’re always saying It’s your favorite book ever, and you even like the books of his everybody else doesn’t, and not just to be contrary or to try to curry favor from above, but because he’s good. I’m not disallowing King, though, but understand that, if you select him here, then you’ve got all his responsibility too. So, just a one-word question this time: Who?

His Joe Pickett series, yes, yes. Thomas Magnum as a game warden—no? Okay, okay, already, sorry: Elvis Cole among the elk hunters. Cool, whatever. Talking about animalsand how easy they are to kill in fiction, though: your last interview. I mean, man, it wasn’t just completely PITA-friendly where pets were involved. It does put me in mind of another question, though: What’s the saddest thing?

Wal-Mart quit selling my favorite three-pack of shirts about four years ago. I’m down to two of them, and one’s stained, the other torn.

You’ve said that your first novel, The Fast Red Road, it’s not about people at all, but about a truck you were, and are, in love with. But, I mean—it’s a 69, right? Two-tone, red-on-white, that peculiar, pearly white Ford used to spray. And of course one of your brothers, he builds show trucks for a living, is currently building up one of your old trucks. So, okay, you know trucks. However. Haven’t you, in another faq, said that, in actuality, it’s 79 Fords that forever have your heart, not 69s? Was dropping back a decade just your way of trying to keep yourself from slathering too much detail onto Clive’s truck? And please don’t reduce this down to that 79 Owen Wilson drove in The Minus Man—he was a killer there, okay? the truck was the exact shade of grey Church was in Pet Semetery—and it can’t be about that yellow 79 in Smoke Signals, forever driving away, and you know that that cherry Ford in Raising Arizona, the one with the polyester tires and those sweet, sweet stock hubcaps, you know it wasn’t even a 78, much less a 79, and don’t get nostalgic here either, talk about the string of 79s you’ve had, and don’t talk about all the 79s that got away either, that you still regret, and let’s not talk about the 79 you’re going to build if that Lucas/Spielberg thing ever happens, and don’t even try to sneak in that sweet silver and blue 79 in your Not For Nothing , that’s all the way in 2014, already. Just—just answer one question, regarding all this truck stuff that shouldn’t even matter for books: Why 1979 F-150s?

Uncle Jesse drove one. And I meant to have said “Horses” earlier.

You meant to have said a lot of stuff, yeah. Anyway, almost done here. But, everybody has one song that’s a tearjerker for them, that gets them crying on the inside, anyway, even if they’re so cool on the outside. For me, say, I don’t know, it’s the only Smashing Pumpkins song I can even pretend to know, but that—and please don’t make too much of the year here, there’s no synchronicity, it doesn’t matter that Pynchon and Waylon were born the same year either, coincidence does exist—but that “1979.” I don’t even understand all the words, I don’t guess. There’s something about it, though, “1979.” I was seven like you then, can’t even remember for sure where I was living at the time. I used to have a picture from around there, proof that I was a kid, but I lost it somewhere along the way. So I have to look for myself in songs, I guess. But we all do, right? In songs, in stories, in movies. And sometimes we find ourselves. On the best days, we find ourselves. Where do you find yourself?

Warrant, “Heaven.” Got a picture of your house, and you’re—