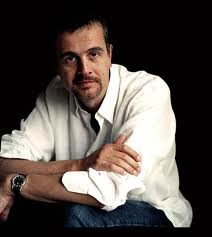 How about this for a great idea for a blog.

Find out which e-books are selling well and talk about them. You might think about taking it on yourself, but I'm here to let you know that some one's already doing it and is going to be doing it rather well.

It's a brilliant concept, set up by a man who knows his onions and his garlic, Allan Guthrie.

The aim of the blog is set out clearly as a showcase for:

some of the current top-selling e-Books...[bringing] some excellent new titles to the attention of a wider readership.

which is beautiful in its simplicity.

You'll find it over at http://ebooks-that-sell.blogspot.com/

While on the subject of Mr Guthrie, his novellas Bye Bye Baby and Killing Mum are a steal as e-books. Check out the links to the right for a look-see.

And so to today. Dancing with razzle and dazzle, we have a shining star of the British crime fiction firmament. Please welcome Mark and Mark Billingham.

MARK: And you look a bit…older. Maybe it’s time to get that author photo re-done.

MARK: You should probably just crack on with the questions before we fall out…and don’t start with that old chestnut about why a stand-up comedian would want to write dark crime novels.

MARK: I was very aware that there were already a lot of music-loving detectives around when I started writing the first Thorne book and because of this I originally thought that there would be no music in the books at all. This quickly proved impossible, but I tried to resist giving him the same taste as me and so early on he was quite into Garage and Trip-Hop, which is the kind of music I hate. It was a stupid thing to do and I quickly put it right. So Thorne likes country, same as I do and it’s the perfect kind of music for a crime novel. The best country songs are dark and twisted tales contained within - and to an extent masked by - an entertaining melody. I think that the best crime fiction works in much the same way.

MARK: If you say so. Is Thorne like you in other ways?

MARK: I think any author who denies there is anything of themselves in their central character is being disingenuous at best. Lying through their teeth at worst. A novel gives you space to get stuff off your chest, so if Thorne is ranting about the state of the health service or whatever, that’s probably me. We have the same birthday but we support different football teams and he’s shorter than me and I think that as my life has got better he has probably become rather more miserable. Funny that.

MARK: Talking of funny (though it’s a matter of opinion) are you still doing any stand-up?

MARK: No, I’ve finally knocked all that tomfoolery on the head. There simply weren’t enough hours in the day and the books now involve so much travelling that I would be away from home far too much if I was still performing as well. Besides which I hadn’t written a new joke in ten years. I still do something close to stand-up at book events—

MARK: But I’m not gigging in comedy clubs any more. I should say that stand-up comics are a far more twisted bunch than crime writers, so I don’t miss it too much.

MARK: Some crime-writers must be pretty twisted though.

MARK: Oh don’t get me wrong, some are as mad as a box of frogs, but generally they’re a pretty good bunch. On the whole, genre writers seem a little friendlier and less competitive. It’s a nice gang to be part of. I heard a brilliant description recently, when someone described crime writers as the “smokers of the literary community”. We’re slightly marginalised, a little bit naughty, but we’re having a lot of fun.

MARK: Naughty? Are you able to provide details?

MARK: But you’re not willing to name names?

MARK: I was very pleased. It had been a long time coming, but I was thrilled that when it finally happened, I was so closely involved. Writers are usually out of the loop on these things, and often that’s the right place to be, but I was close to it from the very beginning having got together with David Morrissey, who was the actor I had always wanted to play Thorne. And I was proved right, because he gave a stunning performance, leading a phenomenal cast that included Aiden Gillen, Eddie Marsan, Natascha McElhone and Sandra Oh.

MARK: What about the people who were unhappy at some of the changes made to the books?

MARK: There have to be changes when a novel is adapted for the screen. Aside from the necessary conflation when you’re making a 400 page novel into three hours of TV, there are things that can be done in a novel that are simply not possible on screen. I can be inside a character’s head. Crucially, I can be inside a killer’s head without revealing their identity to the reader. This is very much trickier on screen, so you have to find solutions to these problems and inevitably this means changes. So while in some ways it’s flattering that people are upset that Elvis the cat is missing, or that Thorne’s car is different, it’s really not worth getting worked up about. As for the casting itself, no actor will ever correspond to the image that a reader has inside their head. It will be interesting to see if readers of the next Thorne novel see David, or Aiden or any of the other actors when they are reading the book. I can tell you that writing Thorne has not changed for me at all…

MARK: Talking of readers being unhappy. Do you still get angry emails from people complaining about the swearing?

MARK: What, you mean those well-balanced and charming people who seem to enjoy books about murder, rape, pain, grief, blood, violence etc, but get worked up about the F-word? I get a lot less than I used to, but when they do ping ominously into my inbox, they are usually corkers and I take great delight at reading them out at events. Basically, if you send me nutty emails, you must accept that I WILL keep them in a little black book and at some point use them as a source of cheap laughs. That’s got to be ten questions.

MARK: Some were supplementary enquiries or casual remarks, so I don’t think you should count those.

MARK: What’s the book you’re most proud of?

MARK: Well, that implies I’m proud of all of them (laughs, then stops quickly). I think actually it would be parts of various books. The concept of Sleepy Head and the character of Alison. Some of Lifeless and Bloodline.

MARK: Answer the bloody question. Come on, if you were hit by a bus—

MARK: I’m just saying. If you could take one book with you to your grave…

MARK: All right then. In The Dark, probably. That might sound odd, as it isn’t a Thorne novel. Something else that upset a few readers.

MARK: Definitely. Are we done?

MARK: The next book?

MARK: Bloodline is coming out this July in the US, published by Mulholland Books. The book I’ve just finished features Tom Thorne and Helen Weeks, who is the major character in In The Dark. It’s coming out here in August and it’s called Good As Dead. Happy?

MARK: Delirious, thank you. Would you sign a book for me?

MARK: What do you think?

http://www.markbillingham.com/sleepy_video1.html
Posted by Nigel Bird at 21:56