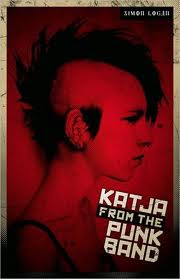 How often do you pick up a book and take an instant shine to it? Feel that you're reading something the likes of which you've not come across before? Decide that the author is a gem and that you're going to check out everything else he's done or will do in the fullness of time?

I wish it were a more frequent occurance for I love the way it makes me feel - the excitement, the stimulation, the tingles as the desire to work out how it's done overcome by the desire to read the story.

Katja From The Punk Band is such a book. I was recommended it by someone whose opinion I trust without any doubt and, just as my memory started to fade, I came across it again as one of Spinetingler's top ten from last year. Here's what Brian Lindenmuth said:

"Only two words accompanied the recommendation for this book, “fucking brilliant”, and they are dead on right. A brilliantly constructed crime story that takes place in a uniquely fantastical, horrific and grimy setting. Some have called it horror (because of the publisher) and others have called it SF/F (because of the secondary world feel to it); while I can see where these labels come from they are misapplied — it is a crime story through and through. It isn’t on your radar screen but it should be. If you like darker crime fiction it will blow your mind."

He's right. It's a brilliant read.

Set on an island in a world which I could imagine but not recognise, Katja becomes involved in a remarkable series of events. It involves drugs users, pushers and makers, a vial of something special, a probation officer, a lot of dark, dingy places and a gun. Katja wants off the island, yet it is as difficult as Alcatraz to escape.

By itself the ingredients may not seem entirely unique.

What I think is very special is the immediacy of the story. Told in the present tense from a number of different perspectives we loop from one tale to another until a full picture is scratched into the skin.

I also love the lack of back story - nothing here to weight things down, slow things up or merely irritate, just snippets of info that tell a life within a word or a phrase.

The sentences are stripped of any excess yet are packed with splendour at the same time. Imagine biting into a sweet that looks plain and simple only to have the flavour fully explode onto your tongue as soon as you put it into your mouth. Now imagine this book.

The characters take us where they need to be and act and react in the way they have to at the time.

I'm delighted to have him here today. A man of words and stories. Simon Logan, ladies and gentlemen.

Two main reasons – one, compulsion and two, anger. I often feel that I need to write more than I want to write. I have ideas and they metastasize into something that can only go so far in my head – the only way to exorcise them is to write them out of me. As for the anger, a lot of what I see others doing and see getting published and adored pisses me off because it’s shit. Bland, repetitive rubbish annoys the hell out of me and I think that anger is a good thing.

So what makes you angry outside of crappy books?

Stupidity. Ignorance I can handle because it’s inevitable that people are going to be ignorant of thoughts and ideas that they have never come across before but stupidity is people having the information there, or having access to the information at least, and choosing to ignore it wilfully. Laziness too – physical and mental. I suppose actually that stupidity could be classed as mental laziness.

So never mind who your favourite writers are – which writers have you actually learned some sort of valuable writing lesson from?

Chuck Palahnuik and Kurt Vonnegut both showed me how a more relaxed, conversational style is just as acceptable as the more traditional formal approach. The important thing is that you communicate the ideas you want to, it doesn’t matter if you break grammatical rules to do so. Will Christopher Baer’s style of little chunks often no more than a paragraph or even just one single sentence is another example of that. And although I think he’s a pretty lousy writer I always remember Dean Koontz’s advice to use metaphors which explicitly evoke the sort of feeling you are trying to elicit in a scene. So in a horror you’d compare some drops of fluid to blood-stained saliva but in a romance you’d say it was like morning dew. That’s stuck with me.

Don’t you think it is odd to be asking yourself questions?

No. But it is odd to be answering them.

Why do you have such a hard time comparing yourself to other writers?

I don’t know - it’s certainly not because I think I’m anything special, just that I’ve never really come across too many writers who are writing what I want to write. I usually find myself reaching for other forms of art for comparisons. Katja From The Punk Band was The Sex Pistols meets Jackie Brown. Guerra is Cory Doctorow meets Banksy by way of Rage Against The Machine’s Guerrilla Radio. The one I’m working on just now, lovejunky, is basically a result of several years of listening to Deftones lyrics.

You’re an atheist – so what’s your problem with faith and religion?

No problem, as such, I just think that faith is a crutch or scaffold in that it is only useful as long as we need it but should be discarded as soon as it can be otherwise it becomes an obstruction. You need a system like science, like reason, which says that we shouldn’t put all ideas on equal grounding otherwise there would be no differentiation between a civil rights activist fighting to end apartheid and a paranoid psychotic who thinks that secret alien overlords are leaving messages for him in the arrangement of street-vomit. I have no problem with people thinking whatever they want but we should realise that if we are going to advance as a species then we need to weed out the crap and the way to do that is to question everything. Yes, science can be as dogmatic as faith but the difference is that dogma is inherent in faith, it’s a requirement, whereas science itself is not dogmatic, it’s more that the people who try to follow it can be that way.

Why do you plan your books in so much detail before writing them? Why not just start writing and see where it takes you?

I need to know pretty precisely where a story is going to go before I start it otherwise I worry I may never finish it. I have to have an ending, even though it may be vague, and I have to have a beginning. The middle is just the joins between the two so that is more open to change. I tend to cook the idea for a year or so until it’s absolutely screaming to be written before even thinking about writing it. I collect ideas for characters, lines of dialogue, scenes I’d like to have etc. for as long as possible. It’s also a fact of not having that much time to write so I tend to spend many hours in a dreamland thinking about them so that by the time I sit down I can crank out 2-3,000 words on the one night I write a week.

Why don’t you stop being such a lazy fuck and do more research for your books?

I know I should. I sometimes wonder if the reason I write stories which are set in places and times which can’t be pinned down is that it means I can just get on with writing the story rather than having to spend time researching specific relevant subjects. Maybe my constant need for input from any source (TV, movies, books, articles, music) means that I’ve got a steady flow of research that all just sits in there and eventually comes out somehow, some way.

Which part of the writing process is your favourite – the planning and thinking, the actual writing, or the having written?

I think I love and despise them all in equal measure. The initial planning and thinking stage is the most free as you are just drawing ideas in like smack into your veins, playing around with them in whatever manner you want and you don’t have to think too much about how something is going work or even if it will work at all. The actual writing stage I often think is the hardest and least enjoyable part until I’m actually in the flow of it. By the time I come to write a scene I’ve already done all the thinking for what will happen so I’m free to concentrate on the minutiae of each sentence, each piece of dialogue and that process has a very masochistic appeal for me. Then once it’s all done it’s a great feeling of achievement - for about five minutes. After that all I can think about is the next project. In fact I think my main motivation for writing any one story is so that I can get rid of it and start on the next one.

And lastly you’ve been getting some decent reviews and buzz regarding your work lately – so do you still not think you’re anything special?