One Man's Opinion: A MAN'S HEAD by GEORGES SIMENON 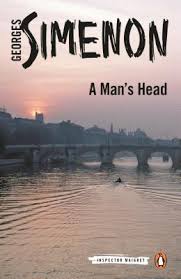 I read three Maigret novels while I was in France at the beginning of the month, each of which provided me with lots of the mood and atmosphere I was after. None of them disappointed, but they did vary between good and great.

I’ll start at the good end of things with A Man’s Head (US).

In this one, Maigret stakes his career on his instincts and arranges the escape of a prisoner from death row. The idea is that by following the prisoner, the true facts of the murder case concerned will come to light. Things don’t go entirely to plan when the prisoner ends up falling asleep for most of his first day of freedom.

Maigret hangs around in a bar full of well-to-do travellers from around the world to get his head round the murder. In doing so, he encounters a young man who taunts and goads the chief inspector by hinting that there is more to the case than has been understood thus far and that Maigret is unlikely to put the pieces of the puzzle into place.

This had echoes of Crime and Punishment as the elements of guilt drive the culprit to their downfall, yet it lacks a crisp punch or any real sense of weight. The strong opening loses some momentum and the conclusion, though almost perfectly dark, misses a beat or two.

My favourite section here was the insight into the backrooms of the Palais De Justice and the detailed obsessive forensic work of Moers.

Well worth a read, as always, but not top of the form.

While I’m here, I’ll point out that readers can pick up a very different kind of mystery story for free today . Recluse (US) looks at a creative genius during the sixties and the high cost of that free love.
Posted by Nigel Bird at 14:37