One Man's Opinion: MAIGRET IN COURT by GEORGES SIMENON 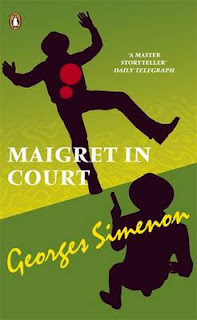 Before my thoughts on another Simenon marvel, I want to let you know that my novel, The Shallows (US), is free for kindle just now. It’s not up to the master’s standards, but I believe it’s worthy of your attention.

Maigret returns from holidaying in Meung-Sur-Loire having bought a retirement home with his wife. The thought of coming to the end of his career and leaving Paris makes him uncomfortable, as does the case he arrives in court to report on. The courtroom situation is thoroughly engrossing. Maigret goes into detail about the events from months earlier when an old lady and four-year-old girl were murdered with the woman’s life-savings being stolen.

In the dock sits Gaston Meurant. He’s a fine man who is doing the best to make a go of life and is easily contented by his simple life. The charge of murder came about after another of Simenon’s anonymous tip-offs entered the ring and another blue suit with bloodstains became crucial to the case.  After Meurat explains that he wasn’t the killer, his life is turned upside down when evidence relating to his wife confirms that she has been having a number of affairs over the years.

There are sneaky goings-on with slippery lawyers behind the scenes and the verdict allows for a new situation to be played out.

Maigret deploys his men to follow and probe Meurat wherever he goes. They end up in Toulouse where a thrilling climax is set up and played out.

There’s a question, in the end, about Maigret’s participation in the case and of his interpretation of justice. One senses that if he has any blood on his hands, it’s washed off easily before he takes another lunch with his wife.

This carries power because of the feelings whipped up for poor old Meurat and because the knowledge is there from the start that the conclusion is likely to be messy no matter how the cards fall upon the table.

Maigret In Court is available here.
Posted by Nigel Bird at 14:27