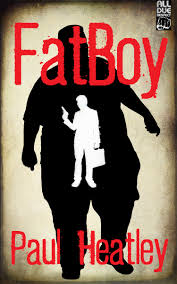 Joey’s wife has gone. She’s taken his son with her to live with her parents at the nice end of town. Joey’s drink problem and a short fuse mean it’s unlikely that she’s coming back and so Joey sinks back into the bottle and to his dull job tending bar in an establishment where there’s more on the menu than just booze. His only friend is prostitute, Lynne, and her time is often taken by the fat boy of the title, an arrogant racist who has money to burn.

Joey does his best to patch things up with his ex, but her resolve is strong and there isn’t a clear way for him to win her back. The problem for Joey is that his heart and his hope won’t give up. The only motivation he has in the world is to get back together to be with his son and the only way he can think of that might make that possible is for him to get hold of a large amount of cash.

Given that it’s unlikely he’s going to get a big pay rise anytime soon and that the tips will never take him to where he needs to be, he constructs a plan with Lynne to extract money from Fatboy and his family. Because the plan is driven by desperation, you can see that it’s unlikely that it will come off, but you can’t help rooting for the guy even so.

The action plays out well and the tension is ratcheted up in just the right way. I won’t go into detail, but will point out that there’s a terrific mode of departure from the world for one of those involved. The finale is a beauty and brings a sobering reality to proceedings – you might want tissues here.

Fatboy (US) is a solid novella with a really satisfying pace and rhythm. The dialogue crackles along and the settings are brutally bleak. The characters are fleshed out and Joey himself walks the tightrope between being hateful and sympathetic with an uneasy balance. There’s also a great cameo in the form of bar owner Patrick O’Donoghue, a tough guy of the granite variety with a philosophical outlook, whom I would have liked to see more of.