One Man's Opinion: THE CARTEL by DON WINSLOW 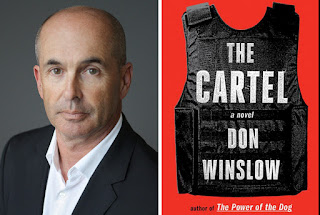 I chose Don Winslow’s The Cartel (US)to take as a holiday read with every confidence that it was up to the job. Its reputation is huge and, weighing in at 600 plus pages, it seemed big enough to keep me busy. We left on Saturday lunchtime and the book was finished before lunch on Wednesday. I think that says a lot about the book. It’s been a great companion and was responsible for some very late nights. I also got to work out by carrying my copy down to the Med and back, so it wasn’t just an emotional workout.

The scale of The Cartel is huge. It follows a feud between US agent Art Keller and the super-powerful drug king Adan Barrera as each tries to pin each other down. This battle forms the body of the plot, but there are many tentacles leading from there. Key characters are introduced and within pages of meeting them we have their complete history nailed and understand their connections and motivations. There are journalists, politicians, agents, beauty queens, lovers, fighters, killers, soldiers, doctors and prostitutes among them and each plays their part with distinction.

There’s something circular about the way the story travels. Eras are defined by political intrigue, and violence. Body counts are listed. Torture and murders are graphically described. Negotiations and double-dealings map out treachery and devious intention. Like the Cartels, the cycle is relentless and seems unbreakable. As a reader, I became immune to the brutality of it all and if this was a deliberate attempt by Winslow to demonstrate how easily people can become numbed into submission by utter barbarity then he was totally successful. This, in some ways, made the journey a little tricky. At certain points, the prospect of another repeated history was rather uninviting. Overcoming that sense of déjà vu was always worth it, however. None of the plotlines lead to cul-de-sacs (although there a plenty of dead ends, I can assure you) and the author is skilled at bringing things to an emotional boil just when that’s required.

The plot here is huge. The characters are enormous – you could probably write a PhD on each, though you don’t necessarily always feel the warmth of their blood or the rate of their pulse. The sense of history brings added weight. Some of the detail feels unnecessary, but I believe that others will relish these elements of over-description. The world with the pages is total chaos – Hell, perhaps. The worst part of the whole piece is that it’s all so bloody real. The book is dedicated to journalists murdered or disappeared in Mexico during the decades covered by the novel and the list goes on forever. That speaks volumes about the world Winslow has fictionalised with such power.

And is it purely coincidence that a writer named Don has written a piece with the fingerprints of The Godfather all over the keyboard? Methinks not.

Thanks Mr Winslow for the experience and the education.
Posted by Nigel Bird at 14:52