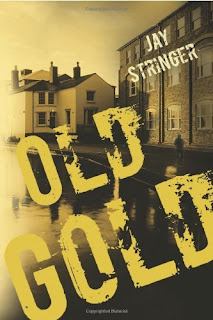 “The drugs trade is like any other, full of office politics and juicy gossip. All you need to do is find the right office junior and apply pressure.”

Old Gold  (US) tells the story of Eoin Miller who is doing his best to get through life without emotional entanglement of any kind.

He’s working for the Mann brothers, the heads of one of the major firms running the area and has just completed a job for them when introduced. To celebrate, he goes for a drink or two in his local and is picked up by an attractive drifter of a woman, Mary, who has taken something very important from her boyfriend and with whom Eoin’s about to spend the night. He wakes up to find that the woman is dead and that someone has gone to a lot of effort to make it look like he’s the killer.

Eoin’s first instinct is to listen to his dad’s advice – to get the hell out of there – based upon the fact that with his Romani blood no one is ever going to give him the benefit of the doubt. He takes to the road and eventually realises that he needs to do something other than surrender. When he returns to his house, he finds the body gone and no evidence that anything is untoward.

His point of attack is to find out what happened to Mary. To track down the killer and find out how he can get out of a difficult situation.

Early links lead him to a new drugs peddler on the block, a Pole who is keen to work the angles and exploit any gaps between the main two gangs in the area. He starts poking sticks in places where they’re not welcome and it’s not long before he’s in an awful lot of trouble.

Add to this a missing person inquiry that the police have dropped due to the sensitive nature of the case and the fact that his estranged wife has been promoted in the force and you have a multi-layered novel to roam in.

I thoroughly enjoyed Old Gold and that’s from start to finish.

Eoin tells the story in the first person and that really works well. He’s a pleasure to get to know – a self-destructive investigator with a real life and real problems.

What I think I particularly enjoyed is the subtlety of the writing. Nothing is overblown. Everything comes in the right measure. The pace is terrific, constantly building yet never rushing to get to the end. The hoods are very well-formed, but are far from being caricatures. The hard-boiled swipes are there, but are more like body-softening jabs than knockout punches. The Midlands works superbly as a backdrop, as a place that is at once familiar and new. Nothing is crammed into the plot for its own sake – everything, including the denouement, works effortlessly. Eoin is complex and interesting, but his facets are introduced and explored gradually rather than in one big bang. There’s also a gentle exploration of a range of issues relating to gender, race, inequality and politics that provide plenty of food for thought (the label I’ve seen given to the book is ‘social pulp’ and that goes some way to covering it).

Above all this is fine fiction, entertaining and thrilling. It’s a book I didn’t want to put down for too long once I’d started and I’ll certainly be reading more in the series. Very good indeed.
Posted by Nigel Bird at 19:43