One Man's Opinion: ALL THOSE HUNGRY MOUTHS by KEITH RAWSON 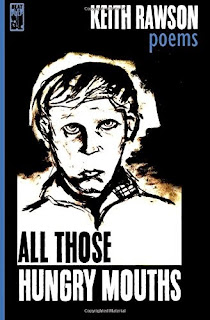 I’d just like to preface this review with a shout for a rather good programme that aired on the radio earlier this week. It’s called Things Fall Apart and it was put out to commemorate that fact that it’s 150 years since the birth of WB Yeats. There are some great readings (and a few that might be a little overblown) and interesting thoughts. You can catch it on iPlayer for a while, I think.

It’s been a while since I’ve read a poetry collection without interruption and All Those HungryMouths (US) made me glad that I decided to do so. I've picked a great day to review it, too, as you can pick up the kindle version for free just now (hurry - no time like the present).

First of all, this book has an introduction that took me back to my own poetry writing heyday. A lot of what Keith Rawson says really resonated with me.

Of course, the introduction wasn’t why I was there. I was hoping to be moved and shaken. Rather pleasingly I found that I was both.

There are a range of styles and approaches on view here and the variety keeps things interesting from start to finish. Some of the work forms a narrative and there are also snapshots of moments or thoughts.

As with any collection, not every poem hit the spot. There were, however, plenty that did and when they found the target they really hit hard. The runningtogetherwords of Two Very Stoned Cops is well worth the effort and the form isn’t gratuitous as it adds to the blurring image of the stoners inthemiddleofthewoodsintheirpatrolcars. Vocation and $25 are examples of the gentle dark humour that bubbles up from time to time, though It’s A Best Practice takes the medal in that arena for the most uncomfortably hilarious piece imaginable. My favourite is called Shotgun which has a real immediacy to it. Reminds me of some of those amazing and almost accidental life-affirming moments for which poems might well have been invented. I think that one’s perfectly stunning.

There’s a little bit of angry-young-man in here, a dash or the romantic, a slice of the hedonist, a touch of the justice-seeker and shades of the crime-writer also.

Overall, this is a satisfying and often moving book and, as if the poems weren’t enough, there are some cracking illustrations to enjoy along the way. Check it out whether you think you like poetry or not, you’ll definitely find something here to more than justify the entrance fee.