One Man's Opinion: LOVE YOU TO A PULP by CS DEWILDT 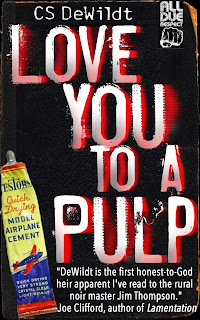 A little preface before the review.

First of all, slightly premature congratulations to Preston North End on their promotion. It's 4-0 with ten minutes to go - I think we're safe. Great job and I hope any friends who made it down for the game are having a thoroughly good time - have a couple for me.

Another nice thing, my collection With Love And Squalor (US) is free just now and for the next few days. Take a copy if you haven't already.

And now to books.

“The scream that came out of that little girl was enough to wake the dead. But of course, it didn’t.”

Love You To A Pulp (US) tells the story of Neil. In fact, it tells two stories about Neil.

In the present, he’s a glue-sniffing investigator who is employed by the local chemist to find his daughter. He’s barely begun the case when he stumbles into difficult territory. His first port of call is a man called Hoon. After a violent interaction, it soon becomes clear that Hoon isn’t the guilty party. Things become much more complex for Neil when he finds Hoon dead in a murder that has been staged to look like a suicide. As we’ll discover, there are plenty of folk around who want that interpretation of Hoon’s death to stand. From this point on, Neil’s journey is fraught with difficulty – there’s violence and depravity in abundance and a lesser character might have given up the ghost at a much earlier stage.

We find out a good deal about the formation of that character in the other strand of the novel, which comes into being through Neil’s glue-sniffing reflection. This deals with Neil’s early life and, in particular, his relationships with his father and a local girl. Neil is dragged up rather than nurtured, though there’s an odd kind of love involved in this upbringing. They work through their poverty and do anything they have to do to survive. This section is very well told and emotionally engaging and to me is the stronger section of the book as there’s a little more complexity here.

There’s a lovely irony to glue inhaling – that rather than bond things together, it tends to make the life of the user fall apart. LoveYou To A Pulp may be the perfect illustration of that.

Worth a look if you like your noir in its darker shades.
Posted by Nigel Bird at 19:19