One Man's Opinion: I WAS DORA SUAREZ by DEREK RAYMOND 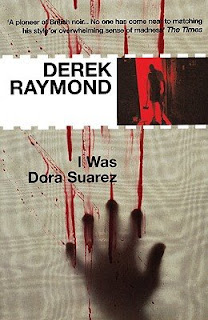 Madness is something I fear. I worry I have it, am nervous I might break down into complete madness or worry that those around me might suffer because of my thinking patterns. A long spell in therapy helped me out with this, but the unease still lingers.

This might help to explain why the opening passages of ‘I WasDora Suarez’ were so difficult for me.
Looked at another way, I’m entirely within normal parameters of human sanity and those chapters would be difficult for anyone. They may also be particularly difficult for male readers given the subject matter, but I’m not sure on that one.

It’s a brutal beginning, the killing of Dora and her landlady, but it’s more the description of the killer’s actions and trains of thought that are particularly sinister.  I’m not sure I’ve been to such extremes before.

So, killer acts and police respond.

The police response is rather amazing. It’s rooted in a brutality of its own in a period of time not so very long ago when the actions of the force were certainly more openly callous and anything went. When such techniques are applied today, I’m sure they’re a little more hidden and covert.  It’s based in The Factory, a place with a foreboding name in itself. The Factory is run by The Voice. The Voice calls back a sergeant who was fired a while before to take up this particular case, reason being he’s the best copper they have even if his methods and manners are problematic.

Our police sergeant is a brilliant mouthpiece. He is inside the mind of Suarez courtesy of her diaries. He’s also in the mind of the killer and the suspects and has an amazing insight into humanity. The only thing he lacks is any sense of manners or etiquette – he sees little need for warmth or politeness as they simply serve to hide a lot of hypocrisy.

The Factory to on about their business and shake up the London underworld.

It’s brilliantly done. The territory is very familiar in terms of the rugged application of threats and violence of the police, but the way it’s handled is wonderfully different. The dialogue is the best example of this. It’s hammed up as far as it can be. Has a very theatrical feel to it. An absurdist one. It’s direct, circular, unconventional and hugely entertaining.

The sergeant slowly wears down the obstacles to finding his man and leads us to a startling climax.

I loved the book and it brought me a lot of pleasure in terms of the structure, the characters and the uncertainty of anyone’s sanity. Good and bad have to mix so that black and white come together to make a grey which seems to turn into some kind of pink.

I did also find some elements extremely difficult to read and that should be a warning to some as I can usually handle some pretty dark material.

Lovers of crime fiction or of literary examinations of the human condition should pick this one up straight away, but make sure your wearing your bullet-proof vest when you open the pages.
Posted by Nigel Bird at 11:29