One Man's Opinion: GONE TO THE FOREST by KATIE KITAMURA 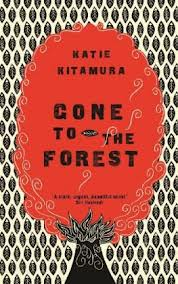 I read The Longshot a while ago and was hugely impressed.


Buying a copy of Gone To The Forest was a must for me and I’m pretty glad that I did.


It’s a strong and disturbing book that follows the lives of a small family and community who live on a huge piece of land that was claimed by Tom’s father (the old man) when nobody else seemed to own it.


At the opening, we meet Tom in extraordinary circumstances. He’s been deserted. The house is empty. A radio on the porch informs locals that the revolution is on its way. There’s immediate intrigue and tension.  The tension mounts when Tom’s father brings along a guest for dinner, the rather wayward niece of landowning neighbours, a lady whom it becomes clear is to become Tom’s bride. In typical, sparse tones, the tale is told:


“He takes the girl fishing and a week later they are engaged. He does not know how the engagement happens. One minute they are fishing and the next Mr Wallace and Mrs Wallace are standing with his father on the veranda. There are champagne bottles being opened.”


Tom’s very wise when it comes to the land, farming and fishing. At everything else he’s rather inept. He doesn’t really understand people and his intuitions are proved wrong at every turn. His decisions are always flimsy and easily influenced and he has blinkers on to what is going on in the world. Like the story itself, he is pretty much confined to his house in this claustrophobic tale.


The characters in the story seem very distant. They don’t drive the story; rather they seem to simply exist from day to day. It can make the read difficult at times, this distance, and being pulled by the nose by the plot is not entirely satisfying. As the characters all seem cold and doomed, it takes some concentration to hang in with the slow pace from one wonderfully told section to the next. If this novel were a character in Oz, it would most definitely be the Tin Man.


In the middle of the book, there’s a natural disaster when a volcano erupts. It causes chaos. Shows the people in the area to be frail and insignificant. Underlines the coldness of their interactions.


There’s lots of beauty to be had in the prose, especially when it’s about the landscape and, like the landscape after the volcano spreads its ash, the future seems as bleak as you’ll find it in almost any other novel, I’m sure.  There’s lots of allegory relating to colonialism, power and to misogyny and this is a worthy attempt at shining a light on such unpleasantness. There’s one scene in particular where Tom’s fiancé becomes the victim of some of the locals that is particularly distressing, all the more so for being put together so well.


All in all, Gone To The Forest is almost a pleasure, though not a pleasure I’d recommend for light beach reading on a relaxing holiday.


Katie Kitamura clearly has a talent as a writer. She has something that is rather special. I hope to find something a little more human in her next effort so that her talents can be fully accessible to me and that I can feel something of the bond to the characters that I felt in her debut novel.
Posted by Nigel Bird at 17:26