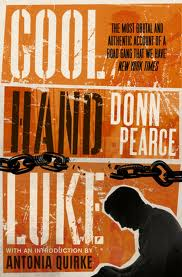 Having recently read a couple of books which spawned films I love (Rumblefish and The Outsiders, for example), I thought I’d give Cool HandLuke a go.


My first impressions were very positive, the lean prose telling of the harsh routines and lives of prisoners on the Hard Road (or chain gang).  As well as its raw quality, there’s something poetic in the simplicity.


Take this, a description of then the gang are being driven back to their cells after another tough day and are taking in some of the sights:


‘The fruit of the orange trees goes speeding by like the globes of distant planets dangling in outer-space.’


Eventually the plot gravitates to the Cool Hand Luke of the title.


He’s a tough bird and a war hero who has seen too much of what human beings are capable of during his time in Europe to ever care about much again. He soon becomes the leader of the pack and the stories of his escapes are retold by those who were there, sometimes to inspire and mostly to help pass the time.


What you get here is a story that’s woven inside a tapestry of prison life. To me, the passages became a little repetitive, like the routines they reflect, which might have a lot to offer many but left me feeling a little stir-crazy. I wanted to burst out and break back into the narrative of Luke’s life on more than one occasion.


I was reminded of a reading event I attended  a good while ago when Ed Bunker brought to life his prison stories with colour and humour; I’d definitely have liked a little of the Bunker spirit in this one.


I did find myself rooting for Luke and holding my breath while I was holding out for news of his progress on the run and there was enough in this to bring me pleasure.


In truth, and the question is always going to be there, I enjoyed the film version so much more.


Once I’d finished, I slipped back to the beginning as I usually do when there’s an introduction. I was quite taken by the author’s life and would like to find out more about him. It made me wish that I’d liked the novel a little bit more.


What I will say is that it has enough about it to make it worth reading. Give it a try and take from it what you can – you just might love it.
Posted by Nigel Bird at 10:01