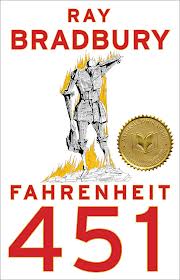 One of the good things about books is that there are so many of
them and that there will always be a gem out there to discover, no
matter who you are or how much you read.


Fahrenheit 451 is one of the diamonds I’ve recently unearthed.


I saw the film of this a very long time ago and it made a strong
impression, but I’d forgotten much of the plot and was left with a
series of powerful images, mainly of burning.


The book’s tremendous on so many levels. Most importantly for
me, it was engaging and dramatic from the beginning and the
unfolding of the story was perfectly paced and gripping enough
when it needed to be.


Montag is Fahrenheit 451. He’s a fireman. A book burner. He’s
identical to all the other firemen he works with and he’s coming to
something akin to a mid-life crisis.


He meets a young girl who helps to open his eyes. She’s special.
She isn’t like most of the human race in this place because she
appreciates conversation and nature and feelings. She’s also, I
think, attractive enough to play hell with Montag’s desires. She acts
as a mirror to his own life – a stale, loveless survival where things
come too easily and where TV and ‘products’ act like anaesthetics
against the human condition.


Montag has had enough of things, but has no idea why or what he’d
like to replace them with.


As he explores his thoughts and feelings, he encounters or come up
against a variety of characters. For example, Faber’s a book lover
and his boss is an all-knowing weapon of society. His own wife and
the community she lives in is dominated by wall-to-wall televisions
and small talk.


There’s also a bizarre war on the horizon. It happens away from the
citizens, but they know it’s coming. It’s a hugely disturbing
element to the book, the cold and sinister inevitability of this
conflict, I guess brought more to the fore with talk of attacking and
killing Syrians who are also attacking and killing Syrians. It's easy
to feel alienated from such huge decisions as this. Here, I'd like to
say I don't want the Western powers to intervene with our bombs
and are glad the British parliament kept the bombings at bay for
now. Chilling.


I’m sure there are a huge variety of ways that one might unpick the
various aspects of this book.


My take is that it got me thinking about the communication age of
computers and apps. I suspect I let too much of my time be
absorbed in these things and have to remember that on my doorstep
there is one of the most beautiful coastlines in the world and that I
have a wonderful family around me who mostly benefit from
attention.


More unnervingly, I’ve recently found myself making mistakes
with something in life and momentarily reassuring myself that it’s
OK because I can press the undo button. That’s a bizarre feeling
when it happens while you’re putting furniture together or have just
smashed a vase or similar.


It’s interesting to see that some of the ideas of the story have been
surpassed in terms of technology and yet the book suggests there’s
more to come in terms of the way society evolves.


My other take was to remember just how well a story can be
written. This one unfolds superbly and finishes with a dramatic
flourish when things reach an inevitable crunch point.


I really enjoyed it and would highly recommend it to you if you
haven’t paid a visit before.
Posted by Nigel Bird at 11:18